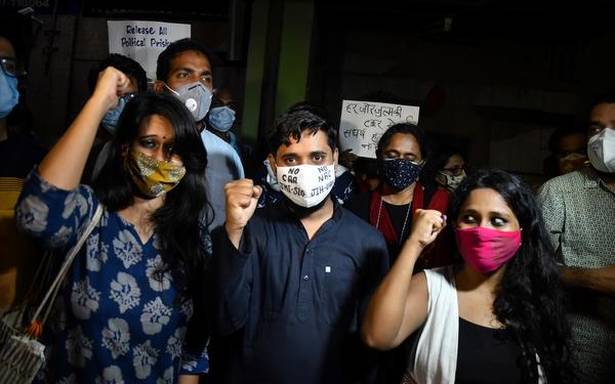 But HC order will neither be treated as a precedent in any court nor be relied on by parties, it notes

The Supreme Court on Friday did not intervene with a Delhi High Court decision granting bail to student activists Devangana Kalita, Natasha Narwal and Asif Iqbal Tanha, but said the High Court’s order of June 15 would neither be treated as a precedent in any court nor be relied on by parties.

“The release of the respondents [student activists] on bail will not be interfered with at this stage,” a Bench of Justices Hemant Gupta and V. Ramasubramanian recorded.

The three students were granted bail by the High Court after a year’s incarceration in Tihar Jail. They were accused of offences under the draconian Unlawful Activities (Prevention) Act (UAPA) in connection with the North-East Delhi riots, which broke out after the protests against the Citizenship (Amendment) Act (CAA) turned violent last year. The High Court accused the police of blurring the line between “terrorist act” under the UAPA and the students’ right to protest against a law.

“The entire UAPA was turned on its head along with the Constitution…” Solicitor General Tushar Mehta objected in the Supreme Court on Friday during the appeal hearing.

Justice Gupta observed orally, “The issue is important. It has pan India ramifications. There are many questions involved here… We want to decide it for the good of the entire country”.

Mr. Mehta argued that 53 people died and 700 were injured in the riots. “The right to protest does not mean the right to kill and hurl bombs,” he submitted. If the protests were held on the “perceived belief” that the CAA was against a particular community, then “the lady who assassinated a former Prime Minister” also did it on the belief that injustice was done to a particular community, he stated.

“A 100-page judgment [by the High Court] in a bail application discussing all the laws, that is what is troubling… “ Justice Gupta observed.

Additional Solicitor General Aman Lekhi, also for the government, said the High Court imputed ambiguity to Section 15 of the UAPA, which defines a “terrorist act”.

Justice Gupta said, “We understand the way the Act has been interpreted [by the High Courtre] requires to be examined”.

Mr. Mehta said, “The HC says eventually the riots were controlled, so it does not come under UAPA…. Now someone puts a bomb somewhere and it is diffused by the police, is the intensity of the case lessened? If I kill somebody, should I be booked only under Section 302 IPC [murder] and not UAPA even if my act comes under the definition of a ‘terrorist act’.”

The law officer was questioning the High Court’s remarks that the provisions of the UAPA are being casually used by the government when charges under conventional penal laws such as the IPC would very well do.

Senior advocate Kapil Sibal, appearing for the students, said “I think the Solicitor General has a lot to say, we too have a lot to say…. In the meantime, let us not treat it [High Court judgment) as a precedent”.

The court posted the government appeal for detailed hearing on the week commencing from July 19.