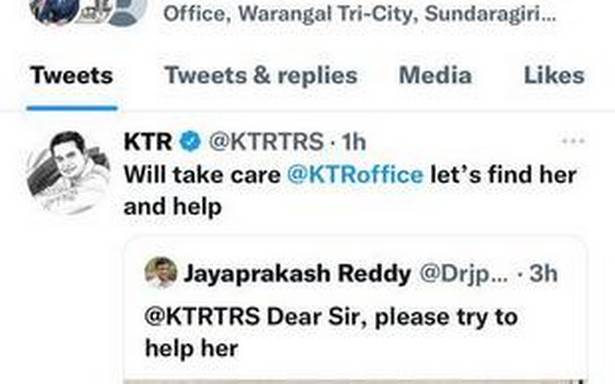 In a heart-warming gesture, several good Samaritans have come forward to support Karam Srilatha, the 17-year-old girl belonging to a poor tribal family from the interior Mamidigudem village in Charla mandal of Bhadrachalam Agency, to help her pursue B. Tech at the Indian Institute of Technology – BHU, Varanasi.

Driven by optimism, Srilatha continued her educational pursuits with fortitude and secured admission in B. Tech (ceramic engineering) course at IIT-BHU by virtue of her 919 rank in JEE (Advanced) 2021. But a major hurdle stood in her way to continue with further studies at a far-off place due to the poor financial condition of her parents.

Srilatha’s determined quest to join the IIT against all odds was highlighted in these columns in a report titled “Adivasi girl from remote village bags IIT seat” on Sunday.

Municipal Administration Minister K.T. Rama Rao was among those who expressed their willingness to extend all help to the Adivasi girl in her endeavour to do the B. Tech course.

Mr. Rama Rao responded to a tweet from a Nalgonda-based doctor, J.P. Reddy, who sought the intervention of the Minister to help the poor girl realise her dream. Mr. Reddy also tagged a copy of the article published in The Hindu highlighting the remarkable achievement of the Adivasi girl from Telangana’s tribal heartland.

Mr. Rao promptly responded to the tweet saying: “Will take care. Let’s find her and help.”

Soon a member of Mr. Rao’s office contacted the Adivasi girl over phone and conveyed the message to the latter.

A host of philanthropists and representatives of various NGOs besides several readers of The Hindu volunteered to extend financial support to Srilatha to give a fillip to her educational pursuits. Many Good Samaritans reached out to The Hindu office to express their desire to help the girl.

Speaking to The Hindu, Srilatha said, “I am overwhelmed by the encouragement and support assured by many generous people, including KTR.”

I am eager to join the prestigious institution and pursue a B. Tech course to prove my calibre in the realm of engineering, she asserted.

Meanwhile, a press release issued by the Telangana tribal welfare department said that the State government is already implementing a scheme for providing post-matric scholarship to all eligible students who got admissions in premier institutions such as IITs, IIITs, NIT, IIMs, Central universities, premier medical colleges, and agricultural universities. About 255 premier institutions are approved by the government for providing post-matric scholarships to ST students studying in premier institutions of other States, which include RTF (Tuition fee, exam fee, special fee and other fees) and maintenance charges

The Project Officer, ITDA, Bhadrachalam, and the Deputy Director (Tribal Welfare) have already been instructed to facilitate the Adivasi girl to apply for post-matric scholarship through e-pass portal, the press release added. It asked all eligible students to apply for scholarship.