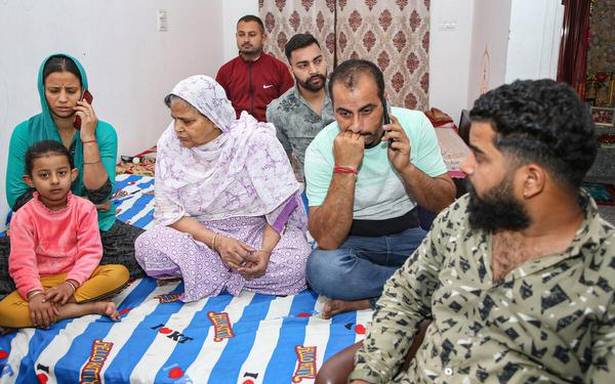 Maoists release a photograph of the officer

Police has been able to establish contact with the group of Maoists who abducted a Central Reserve Police Force (CRPF) commando after the April 3 encounter at Tarrem in Chattisgarh’s Sukma.

A day ago, the banned Communist Party of India (Maoist) released a statement where it demanded that the State government announce a mediator for the release of the commando.

Refusing to divulge details on the negotiation, a senior police official said that the commando would be brought back soon.

The abducted commando, identified as Rakeshwar Singh Minhas, belongs to the Commando Battalion for Resolute Action (CoBRA) unit of the CRPF, which is specially trained for operations in Left Wing Extremism (LWE) affected areas.

On Wednesday, the Maoists released a photograph of Mr. Minhas where he is seen sitting under the shade of a hut in his combat clothes.

“There are positive developments and the commando has been located. We cannot launch an operation as it would risk his life,” said the official.

Asked by the media during the briefing on Cabinet decisions of whether the government would get the CRPF jawan released, Mr. Javadekar declined to comment, requesting the press to maintain “discipline” and stick to questions on the Cabinet meeting of the day.

A joint team of Chattisgarh Police comprising the District Reserve Guard (DRG) and Special Task Force (STF), along with various teams of the CRPF proceeded for a combing operation in south Bastar on April 2. The region is said to be a stronghold of the Maoists and one of the worst LWE affected areas. On April 3, when the troops were returning, the last group was attacked by Maoists, killing 22 security personnel and injuring 31 others. The Maoists also looted 14 weapons, over 2,000 rounds of ammunition, and other items belonging to the security personnel.

The April 6 statement signed by “Vikalp”, spokesperson of the Dandakaranya Special Zonal Committee of the Maoists, said that four People’s Liberation Guerilla Army (PLGA) cadres had been killed in the encounter at Tarrem on April 3.