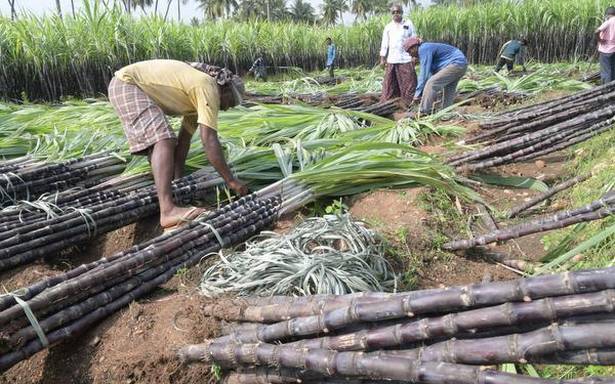 The harvest of sengarumbu variety of sugarcane for Pongal has begun in the villages situated on the banks of River Cauvery here.

The sengarumbu variety is cultivated in Gobichettipalayam, Sathyamangalam, Kavundapadi, Bhavani and Kodumudi areas and the harvested cane is procured by traders and sold in local markets and in nearby States.

Due to availability of water, the production was good this year, said a farmer in Kodumudi. He said the cane was widely cultivated in Samayasangili panchayat in Namakkal district. “It is a 11-month crop that needs regular maintenance and availability of labour is a challenge,” he added.

Farmers said that each bundle, consisting of 20 canes, is procured for ₹ 600 to ₹ 750 from them and marketed by traders.

In retail, a pair of cane is sold between ₹ 80 and ₹ 100. Increase in labour charges, transportation and production costs continue to be a concern for farmers who urge the State government to procure cane directly from them for distribution through ration shops. Though the State government ordered that a cane, not less than six feet tall, should be purchased at a maximum price of ₹ 33 a piece, farmers complained that they were forced to sell the produce at a very low rate.