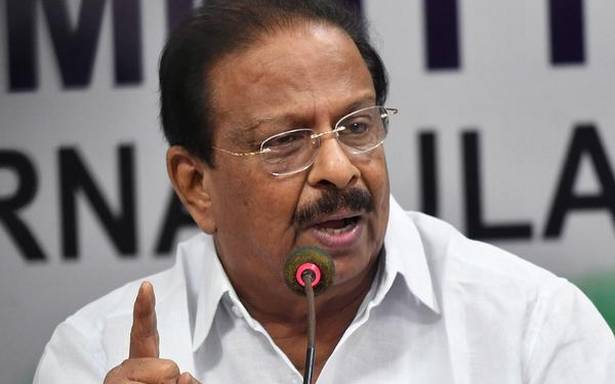 The spat between Chief Minister Pinarayi Vijayan and Kerala Pradesh Congress Committee president K.Sudhakaran escalated on Saturday with the latter accusing his arch-rival of being the fountainhead of political violence in Kannur.

At a press conference characterised by combative language and stormy rhetoric, Mr. Sudhakaran said Mr. Vijayan had orchestrated the murder of scores of political opponents in the State.

The Congress lost 28 workers to Communist Party of India (Marxist) violence in Kannur. The Congress had resisted the violence but its Gandhian ethos prevented the party from retaliating in kind. Mr. Sudhakaran said he was the prime victim of CPI(M) violence in Kannur. “They ambushed my car thrice. I never take the same route. Congress workers guarded my house. I travel in a cavalcade for protection. The CPI(M) foisted false cases on me, including two murders. The court threw both out,” he said.

He said he had no blood on his hands. In contrast, Mr. Vijayan was the first accused in the murder of Bharatiya Janata Party activist Vadikkal Ramakrishnan.

He reasserted that he had physically confronted Mr. Vijayan in the heat of a Brennan College campus brawl between Left and Congress student unions in 1967.

Mr. Sudhakaran’s claim, which appeared in a news magazine, had provoked Mr. Vijayan to lambast Mr. Sudhakaran at a press briefing on the COVID situation on Friday.

He said the Chief Minister had stooped too low to make allegations against him and the Congress and that he did not want to do what Mr. Vijayan had done.

Mr. Sudhakaran denied Mr. Vijayan’s insinuation that Left student activists had stripped him of his clothes and chased him in Brennan College and added that he was ready to produce any number of the then students and teachers at the college to disprove the allegations made by the Chief Minister.

The Congress leader said the allegations like plans to kidnap the children of Mr. Vijayan were absolutely false.

(The Chief Minister had accused Mr. Sudhakaran of plotting to kidnap his children when they were school students.)

He said the allegations against him were aimed at diverting attention from the accusations facing the government on the issue of illegal tree felling at Muttil in Wayanad district and other parts of the State.