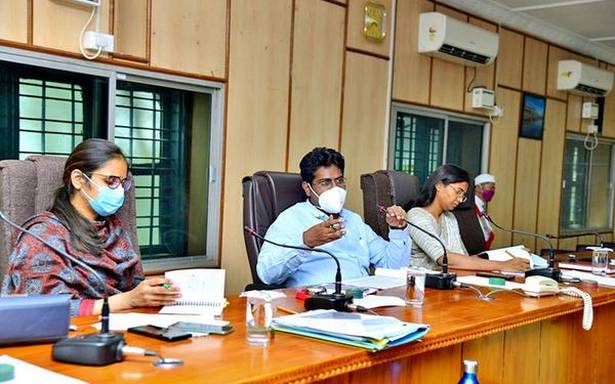 Ballari Deputy Commissioner Pavan Kumar Malapati asked district level officials of different departments to submit their project reports within a week on the programmes to be implemented in the next 100 days under Jal Shakti Abhiyan.

Addressing a meeting of the district level officers at his office in Ballari on Thursday, he told the officers to prioritise water conservation, rainwater harvesting, rejuvenation of water bodies such as lakes and tanks, recharging borewells, watershed development and afforestation when preparing project plans under the campaign.

“You all need to prepare project reports at the earliest possible and put them on fast track so that their progress could be visible within 100 days. Focus on such projects that could raise groundwater table,” he said. Mr. Malapati told the officials that a Jal Shakit Kendra would be opened at his office and a senior officer from each department be nominated as nodal officer to ensure the effective implementation of the projects under the Abhiyan.

“We will ask all tahsildars to clear encroachment of water bodies and develop them for rejuvenation,” he said.

Zilla Panchayat Chief Executive Officer K.R. Nandini directed the Rural Drinking Water and Sanitation Department engineer to collect information about water bodies in rural areas that were used for drinking purpose and prioritise them for development and rejuvenation.

A Minor Irrigation Department official told the meeting that of the 89 small tanks across Ballari district, two were encroached upon and steps were on to clear the encroachments.

Responding to him, Mr. Malapati told the officer to ensure that the encroachments were cleared at the earliest possible.

“Select 20 important tanks and develop them this year by dredging and planting saplings around them. You need to remove silt from the canals and stream that supply rainwater to these water bodies,” Mr. Malapati said.