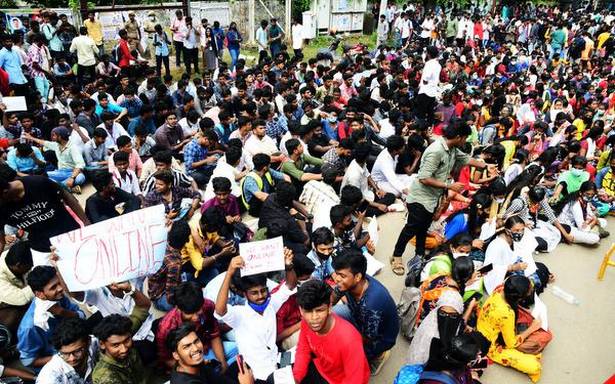 The students said that they sought online examination only for this semester as transition from online to offline would take more time.

Hundreds of students of American College on Monday protested at the Madurai Collectorate against the college administration’s decision to conduct semester examination on offline mode.

Even when students were allowed to attend the college physically, the mode of teaching was only through online, they said.

“After the State government announced that all semester examination should be conducted in offline mode, we made the announcement. The college cannot take a decision on this issue,” college Principal, M. Davamani Christober, said.

The students said that they sought online examination only for this semester as transition from online to offline would take more time.

After staging a protest on the college premises in the morning, the students marched towards the Collectorate and squatted in front of the Collectorate. They claimed that some colleges in the city were conducting the examination in online mode.

Meanwhile, the Principal announced postponement of the examination schedule by two weeks.

“As of now, we have given them more time for them to prepare well for the (offline) examination. The final call on the mode of examination will depend of the government’s instructions,” Mr. Christober said.

For the first year UG and PG students, the examination was scheduled for first week of December.

The students dispersed around noon after the announcement of postponement of examination.