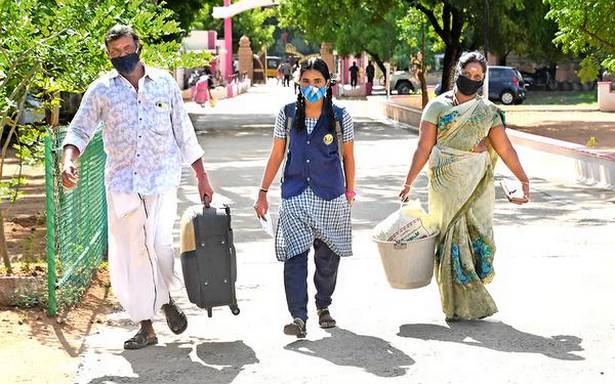 With COVID-19 protocols in place, schools in the district began functioning for classes IX to Plus Two on Wednesday.

According to Chief Educational Officer R. Swaminathan, out of 1.65,684 students in the district, close to 90% of them were present. If hostel students were excluded, the overall attendence percentage would go up to 95.

Most students looked eager to meet their friends and begin a normal campus life again, while some were concerned about catching up on syllabi for the academic year.

Saravana. A, a Plus Two student from Elango Corporation Higher Secondary School, said he was happy to be back at school. “Online classes are informative, but nothing can replace the experience of coming to school. Though we do not have everything figured out right now, we will get into the groove slowly,” he added.

Sharmila Banu, Headmistress of Ponmudiyaar Corporation Higher Secondary School, said no pressure was put on students to attend classes in person, but they were eager to come back to school. The school had 687 students in classes IX to Plus Two.

“We have classes for standards IX and Plus One on alternative days and classes for Std X and Plus Two on all six days. A majority of the students attended the school on the first day here. The student turnout is expected to increase in the coming days.” she said.

Vijaya Sundar, Principal, Mahatma Montessori Higher Secondary School, K.K. Nagar, believed that attendance was particularly good among Class X and Plus Two students. “Since children have come back to school after a long time, the first day mostly revolved around non-academic activities. We are just gradually warming them up,” she said.

Out of the 456 students who constituted 50% of the strength between classes IX to Plus Two 2, only 10 were absent. The other half would attend classes on Thursday, said N. Vidhyavathi, Principal of TVS Higher Secondary School.