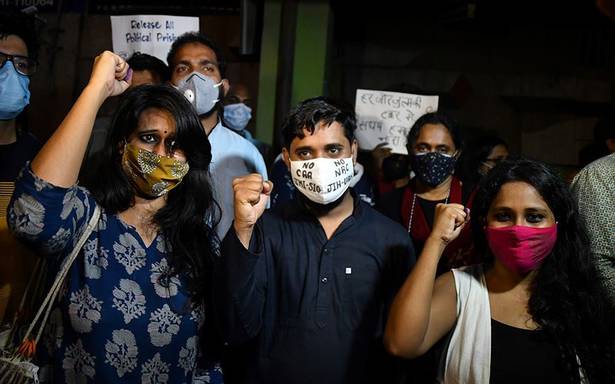 A Delhi court on June 17 issued the release warrant for Jawaharlal Nehru University students and activists Devangana Kalita and Natasha Narwal and Jamia Millia Islamia student Asif Iqbal Tanha, who were arrested in May 2020 in connection with the northeast Delhi riots.

Additional Sessions Judge Ravinder Bedi rejected the Delhi Police argument that it needed more time to verify the permanent addresses of the three accused as they are outside Delhi. “I would say this by itself cannot be a plausible reason for the accused to be kept imprisoned till the time such reports are filed,” the judge said.

“The accused is directed to be released forthwith as per orders of the Delhi High Court,” the court said taking into account the undertaking given by the counsel of the accused that their clients will not leave the jurisdiction of the Capital.

They were released from the Tihar jail on June 17 evening.

In the morning, the High Court directed the trial court to “proceed with promptitude and expedition” on the pleas filed by the three activists seeking immediate release.

“The orders enlarging the applicants on bail has already been rendered by us. It needs to be implemented. This cannot be an open-ended process,” the High Court had said.

The Delhi police argued that it also needed to verify the Aadhaar cards of the people who have been nominated as sureties by the three accused. For this, the trial court can pass an order directly to the authority concerned, they said.

“Do you follow this procedure in other cases as well,” the High Court asked the Delhi police.

Both Ms. Kalita and Ms. Narwal, who were arrested in connection with the northeast Delhi riots in 2020, were granted bail by the Delhi High Court on June 15. Following this, they had moved the local court for securing immediate release order.

The Delhi Police have moved the Supreme Court challenging the High Court verdict granting regular bail to the three students who were booked under the anti-terror law Unlawful Activities (Prevention) Act (UAPA). The case is likely to come up for hearing on June 18.

While granting bail, the High Court gave the Delhi Police a dressing down for ‘casually’ invoking provisions of anti-terror laws against the three who had protested against the enactment of the Citizenship (Amendment) Act (CAA).

“We are constrained to say that it appears that in its anxiety to suppress dissent and in the morbid fear that matters may get out of hand, the State has blurred the line between the constitutionally guaranteed ‘right to protest’ and ‘terrorist activity’,” the High Court had remarked.

The High Court also ruled that no offence under the UAPA was made out against any of the three students.

Ms. Kalita has been named in four FIRs filed in connection with the riots. She was arrested on May 23 last year. She had already got bail in three of the four FIRs, before the High Court also granted her bail in the UAPA case.

Ms. Narwal has three separate FIRs lodged against her arising from her alleged involvement with the protests against the CAA and the NRC. She, too, was arrested on May 23 last year, and had already secured bail in the other two FIRs.

Mr. Tanha was first arrested on May 19 last year in connection with the UAPA case. He already has secured the court’s order for bail in another case.