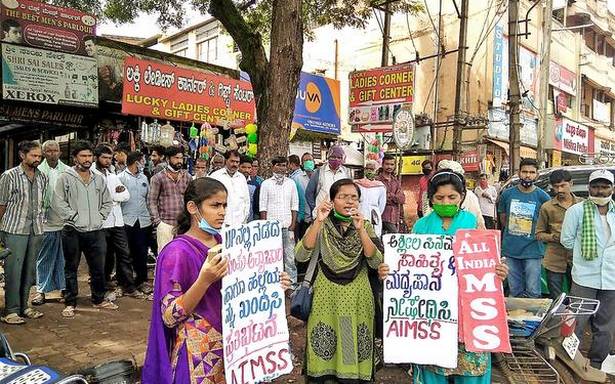 Members of All India Mahila Samskrutika Sanghatane (AIMSS) held street meetings at various localities in Dharwad on Tuesday condemning the Hathras incident and the Uttar Pradesh government’s apathy towards in providing justice to the victim’s family.

The Hathras rape and assault incident took place in September; it will be a month on October 14. And, as mark of a protest, the Dharwad district committee of AIMSS organised street meetings by the roadside at various localities.

The street meetings were held at the City Bus Terminal, the Old Bus Station, the Vivekananda Circle, among other places.

The protestors sang songs, raised slogans and highlighted the need for raising voice against such inhuman crimes and also the need for a united fight to get justice to the victim’s family.

District secretary of AIMSS Vijayalakshmi Devatkal said that recurrence of such inhuman crimes had made one to wonder whether society one lived in was civil. “The Uttar Pradesh government has indulged in character assassination of the victim in a bid to protect the accused who belong to the powerful community of the State. The way the incident had unravelled clearly indicated how the system looked at women and how women from the lower classes were being exploited,” she said.

District AIMSS vice-president Gangubai Kokare said that the incident also revealed the patriarchal mindset of society. She said that sex and violence in mainstream films, pornography, vulgar literature, drugs and liquor were the main cause for the increase in such crimes and they should be totally banned.

AIMSS joint secretary Devamma demanded speedy trial in the case in a fast track court outside Uttar Pradesh and stringent punishment to all those involved in the crime. She also sought action against the police officials who had denied a decent funeral for the victim.