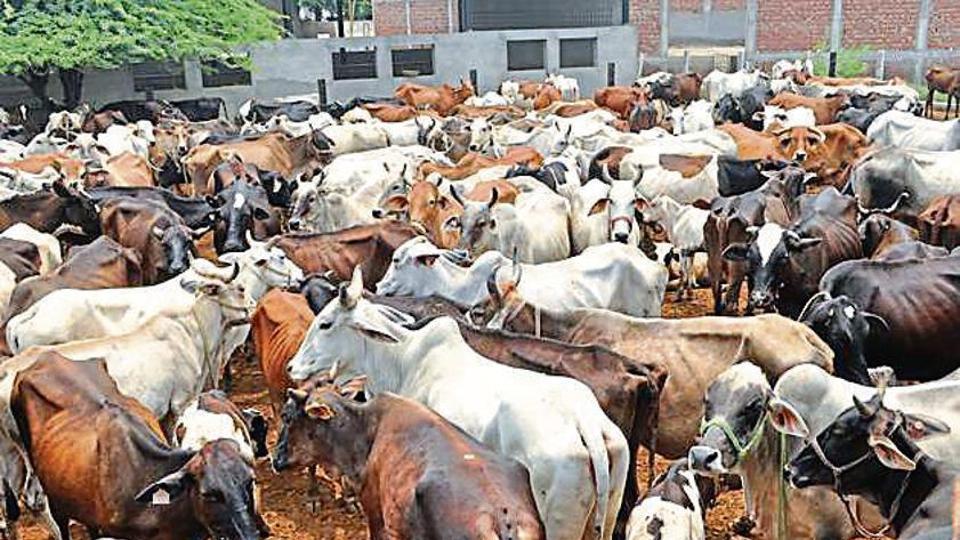 Though the number of gaushalas in Haryana has risen in the past two-and-a-half years, caring for abandoned cattle is becoming difficult for authorities due their ever-increasing numbers.

The are currently 567 gaushalas in the state (up from 350 in 2017) but most of these, especially the ones in Karnal, Kurukshetra, Yamunanagar and Panipat districts, are overcrowded and facing a dire shortage of funds. With the population of stray cattle in the state estimated to be around 4 lakh, the authorities are struggling to provide even basic necessities such as fodder, water, shelter and treatment.

A visit to any gaushala would reveal the plight of these cattle. It’s a common sight to see the cattle battling the scorching heat in the absence of enough shelters.

Why is this happening?

As farmers find it difficult to afford the upkeep of their livestock once the cattle stop producing milk, they abandon them soon after. Vikram Singh, a caretaker at Govansh Dham Anusandhan Kendra in Mathana village of Kurukshetra district, says,“As soon as the cows stop producing milk, their masters abandon them and they are left to die. It seems the cow is no more Gaumata” .

Moreover, due to the ban on cattle slaughter under the Haryana Gauvansh Sanrakshan and Gausamvardhan Act, 2015, and monitoring by cow vigilantes, the number of stray cattle has been increasing.

As per the figures of Haryana Gau Sewa Ayoga (HGSA), the number of stray cattle in the state increased to over 4 lakh from 2.60 lakh in the past two years. Even, the number of gaushalas/nandigrams has increased to 567 from 340 in 2015 but their capacity is limited.

“The number of stray cattle in most gaushalas is around 2,000 against the capacity of 1,500. It becomes difficult for us to provide proper care to the animals due to this,” said a caretaker of a private gaushala in Karnal’s Tarori town. “Moreover, the government does not provide us sufficient fundsand we are dependent on largesse of gaubhakts,” he adds.

Even the Nandigram set up by the Karnal municipal corporation on about eight acres of land in Phoonsgarh village does not have the capacity to accommodate the 1,300 cattle that are presently here. Two more cowsheds are being constructed at the Nandigram as per officials.

The HGSA, which has an annual budget of Rs 30 crore, is taking the help of village panchayats for obtaining land to set up gaushalas. They are also awarding Rs 5 lakh cash award to panchayats for providing two acres of land for the purpose.

Talking to Hindustan Times, HGSA chairman Bhani Ram Mangla said, “We are committed to providing all basic amenities to cattle but their increasing numbers is the main challenge. In the past two years, we have set up 227 new gaushalas in the state but we need more gaushalas.”

“We have also prepared an action plan to make these gaushalas profitable by selling cowdung, urine and milk,” he said adding that in the past one year, the Ayog has sent 1.20 lakh stray cattle from roads to gaushalas.

“There is a law to check cow slaughtering but there is no law to check stray cattle coming to Haryana from other states, especially in the border districts of Sirsa, Hisar and Fatehabad,” an official of the Ayog said.