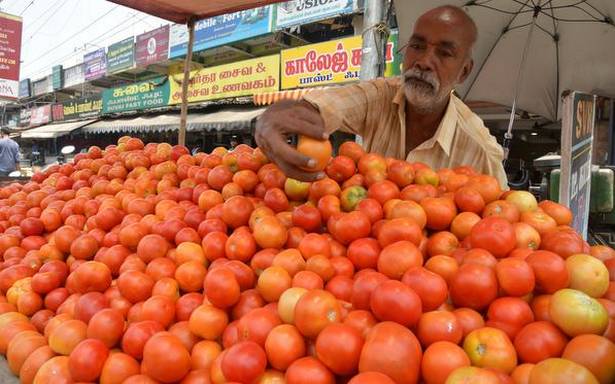 Traders attribute price rise to a mismatch in supply and demand

Poor arrivals have led to a steep rise in price of tomato in the city. A kg of tomato was sold between ₹45-50 in the retail shops at Gandhi Market on Saturday. It was quoted between ₹50 and ₹60 a kg in most of the grocery shops.

In the wholesale market, it was quoted at ₹40 a kg. The price of tomato, one of the essential cooking items in households, ranged between ₹10 and ₹15 till a month ago. There were months when the price of tomato plummeted to ₹8 a kg in the retail market in the third quarter of 2018.

The upward trend began during the last week of April. It went up to ₹30 a kg during the first week of May and further rose up to ₹40 in the second week. It is now quoted between ₹45 and ₹50 a kg.

Traders attribute the price rise to a mismatch in supply and demand. They say that the Tiruchi market hardly receives supply from local areas such as Manapparai, Thuvarankurichi and Vaiyampatti. There is no arrival from Oddanchathiram, Pollachi, Coimbatore, Theni, Dindigul and Kallupatti. Since the tomato suppliers from the State prefer to sell the tomato produce in their neighbouring towns itself, the traders in Gandhi Market depend on arrival from Karnataka, Andhra Pradesh and Telengana.

As against the normal arrival of 20 loads of tomato a day, the Tiruchi market now receives just five loads, they said. “I receive just one fourth of the requirement. Five traders share one load of tomato due to short supply. We could not meet the requirement of consumers. It has caused sharp increase in price,” said M.K. Kamalakannan, president, Gandhi Market Traders Development Association.

He said that tomato cultivation had come down drastically in Thuvarankurichi, Manapparai and Vaiyampatti due to severe drought. Moreover, the farmers, who were severely hit because of poor price offered for tomato for several months until April, had been forced to opt for other crops.

Mr. Kamalakannan said the upward pricing would continue for at least one month. It is likely to come down in July.