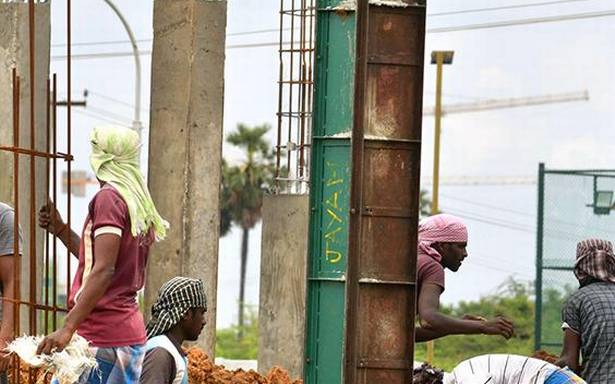 The rise in prices of steel has hit the construction industry hard. Expenditure on steel constitutes about 15% of any construction project. In projects such as construction of bridges, it goes up to 20% to 25%.

Stability in prices of steels is an important factor in signing government or private projects. But, the way in which steel prices are moving upward in recent months has come a rude shock to the builders and contractors.

Though the prices are going up constantly in recent years, the period from June to December has seen sharp increase. The retail price of a tonne of steel (medium ranged brands) was quoted as ₹64,000 in Tiruchi in the first week of January. It was ₹42,000 in June. The price has gone up by ₹22,000 within 6 months and almost doubled in a year.

The rate of steels marketed by top rated steel companies was hovering around ₹69,000 a tonne in retail markets in Tiruchi. It was around ₹49,000 in June.

“It is unprecedented. It has dealt a severe blow to the builders and contractors irrespective of the volume of projects,” I. Shajahan, president, Confederation of Real Estate Developers Associations of India, Tiruchi.

Ravichandran, a leading flat promoter in Tiruchi, said that the builders were bewildered on completing the agreed projects. Except a few well-established builders and contractors, others were in perilous situation as they could not complete the projects with the agreed rates.

“We consider the sharp increase in prices as a double blow to the construction industry, which is still struggling to come to terms due to the impact of COVID-19. Dealers predict that the prices of steel are likely to go up further in the weeks to come,” Mr. Ravichandran said.

Mr. Shajahan said that there had been no clarity on the reasons that led to the price rise. It had been taken to the notices of the Central and State governments. They should take steps to stabilise the price immediately, he said.