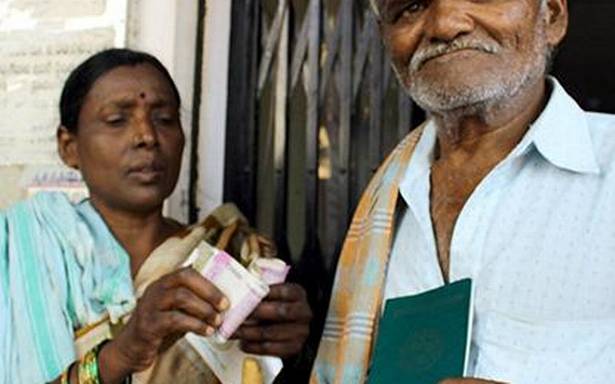 The State government is struggling hard to fulfil the promise of crediting the amounts assured under its flagship Rythu Bandhu, farmers’ investment subsidy scheme, from June 15 in view of the steep fall in the revenues on account of novel Coronavirus (COVID-19) pandemic.

The investment subsidy scheme involves crediting of around ₹7,400 crore into the accounts of little over 60 lakh farmers between June 15 and 25 as assured by Chief Minister K. Chandrasekhar Rao. The government has decided to raise ₹2,500 crore open market borrowing through the Reserve Bank of India during the auction to be held on June 8, but it will still fall way short of the target of ₹7,400 crore required for the Rythu Bandhu.

The State will exceed the target of ₹8,000 crore open market borrowings tentatively projected for the first quarter of the current financial year and the same had been submitted to the RBI ahead of the commencement of the financial year. Availing of ₹2,500 crore in Tuesday’s auction would take the total borrowings from April 1 till date to ₹8,500 crore.

The State raised ₹6,000 crore in four instalments in the first quarter and it should opt for one more instalment of open market loans to fulfil the commitments under Rythu Bandhu. It may be recalled that the State government borrowed ₹12,500 crore during the first quarter ending June 30 last year owing to significant drop in revenue due to lockdown and the pace of economic activities remaining slow after the restrictions were lifted.

Finance Department officials however remained tight-lipped when asked about the options before the State to raise funds to fulfil its commitments like Rythu Bandhu, implementation of the revised pay scales to all categories of employees effective April 1, but not materialised so far.

The State’s finances improved markedly in April but the revenue realisation suffered a huge set back since the second week of May following the lockdown imposed from May 12. According to information available, the State was on course of achieving the targeted revenue through Stamps and Registrations and Goods and Services Tax during April.

The State’s GST collection was ₹3,019.54 crore during April as against the ₹35,520 crore for the full financial year and the same was the case with the Stamps and Registration Department which reported ₹726.77 crore revenue against the budget estimates of ₹12,500 crore for the fiscal 2021-22. The Excise revenue was ₹1,036.9 crore during the month against the ₹17,000 crore budget estimates for the year while the State raised ₹1,925 crore through loans/borrowings in April.

06/07/2021 India Comments Off on State struggling to mobilise resources for Rythu Bandhu, other commitments
India