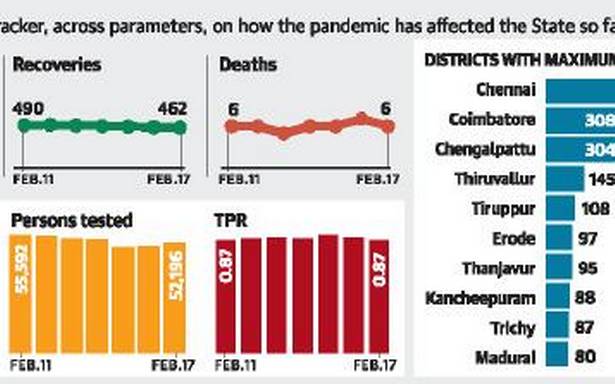 Of the fresh cases, Chennai accounted for 147. A total of 38 persons tested positive for COVID-19 in Coimbatore, while Tiruvallur saw 35 cases and Chengalpattu 33. There were 26 cases in Kancheepuram and 20 in Erode. Among other districts, Kallakurichi recorded no new case, while four other districts — Ariyalur, Pudukottai, Ramanathapuram and Theni — reported one each.

Three returnees — one each from West Bengal, Andhra Pradesh and Chhattisgarh — were among those who contracted the infection.

Six more persons succumbed to the infection. While four of the deceased died in private hospitals, two died in government facilities, taking the toll to 12,438. Of the deaths, Kancheepuram recorded two, while Chennai, Tiruvallur, Tiruppur and Virudhunagar saw one each.

One of the deceased, a 60-year-old man from Tiruppur, did not have co-morbidities. He was admitted to a private hospital in Coimbatore on February 12, with complaints of fever and difficulty in breathing for three days, and died on February 16 due to COVID-19 pneumonia. A 62-year-old woman from Kancheepuram died at the Rajiv Gandhi Government General Hospital on the same day of admission on February 14 due to COVID-19 pneumonia, respiratory failure and septic shock. She had diabetes and systemic hypertension.

A total of 462 persons were discharged after treatment across the State.

The number of healthcare workers and frontline staff vaccinated in the State crossed three lakh on Wednesday as 19,097 more persons received the vaccines.