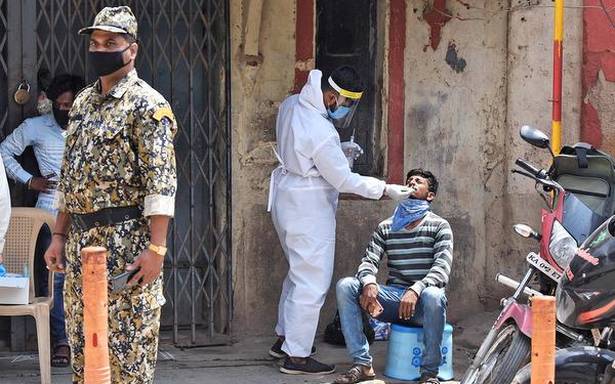 With the daily tests crossing one lakh on Wednesday, the State reported the highest single day spike with 10,947 new cases. This is the second highest number of cases reported in the country on Wednesday after Maharashtra.

As many as 9,832 persons were discharged on Wednesday taking the total number of recoveries to 5,42,906. Active cases continued to remain over lakh with 1,16,153. Of these, 841 patients are being monitored in the ICUs.

Active cases in Bengaluru have now touched 58,624, which is higher than that of Tamil Nadu, Andhra Pradesh and Uttar Pradesh.

Testing ramped up in Bengaluru

From conducting around 2,000 tests a day, the BBMP is conducting tests upwards of 30,000 a day now. On Wednesday, the civic body conducted 35,183 tests, the highest so far, said civic chief N. Manjunath Prasad.

Of the 6,488 RAT performed on asymptomatic persons, 692 tested positive.

So far, in BBMP and Bengaluru Urban district limits, as many as 1.9 lakh people had been screened and 7.29 lakh swabs for RT-PCR tests collected and 3.14 lakh RAT performed.

As many as 50,223 primary contacts and 51,890 secondary contacts had been identified by the contact tracing team.

10/07/2020 India Comments Off on State records most number of tests, biggest jump in cases
TV & Movies