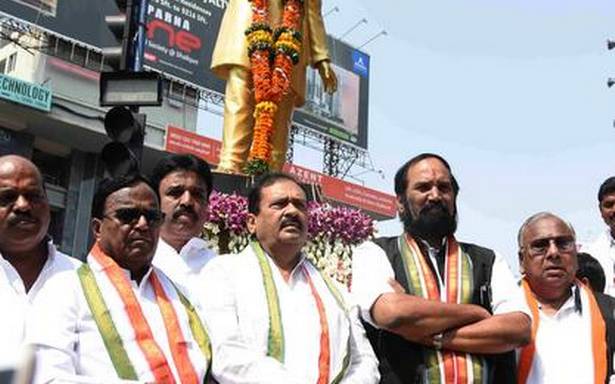 Speaking at the meeting, Mr. Uttam Kumar Reddy attributed the present-day information revolution such as high use of mobile phones and computers to the reforms introduced by late Rajiv Gandhi as the Prime Minister.

Condemning the remarks of Prime Minister Narendra Modi on Rajiv Gandhi, he said it was the then Prime Minister who strengthened the Panchayat Raj system in the country.

Stating that the Congress had no faith in exit polls, Mr. Reddy said they were hopeful that the party would achieve expected results in the elections across the country, including Telangana. Former PCC president Mr. Lakshmaiah said it was due to the efforts of Rajiv Gandhi that every third IT professional across the globe was an Indian. He condemned the remarks of Mr. Modi on the death of Rajiv Gandhi and also the comments of Sadhvi Pragya Singh Thakur hailing the killer of Mahatma Gandhi, and stressed to need to fight terrorism in every form.

People in general do not know what Mr. Modi did for them in the last five years, but they were well aware that it was due to the reforms introduced by Rajiv Gandhi that the facilities such as satellite television, cell phones and others were available now, TPCC vice-president Mallu Ravi said. It was Rajiv Gandhi who brought in anti-terrorism policy, electoral reforms and special budgetary provisions to rural areas through reforms in the Panchayat Raj Act, he stated.