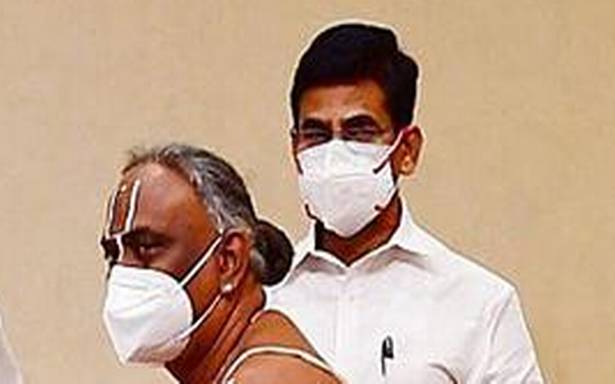 Chief Minister M.K. Stalin on Tuesday launched the scheme to provide uniforms and dhoti-angavasthram to Archakas, Bhattacharyas, Odhuvars and Poosaris and staff of temples under the purview of the Hindu Religious and Charitable Endowments (HR&CE) Department. He presented uniforms and the dhotis to 12 persons as a token at a function at the Secretariat.

A total of 52,803 persons, including around 7000 women, who work as priests, temple staff and Odhuvars would receive the clothes. The male priests would get two sets each of dhoti-angavasthram with mayil kann and the women will receive maroon-coloured saris with yellow borders.

The male staff would get two sets each of brown-coloured trousers and sandal-coloured shirts. The scheme, which would cover staff and priests in 36,684 temples, would cost ₹10 crore and had been announced in the Budget for 2021-22. Major temples will bear the cost of uniforms.

Minister P.K. Sekarbabu said when staff wear uniforms it would be easier for devotees and members of the public to identify them. At present, though staff at major temples do wear uniforms, they are all not the same. In this case, staff of all temples would be dressed in the same colours. Also, the scheme would help staff and priests of smaller temples, who work on smaller salaries, he added. Chief Secretary V. Irai Anbu, Secretary B. Chandra Mohan and Commissioner J. Kumaragurubaran were present during the event.

01/04/2022 India Comments Off on Stalin distributes uniforms to staff, priests of temples
India