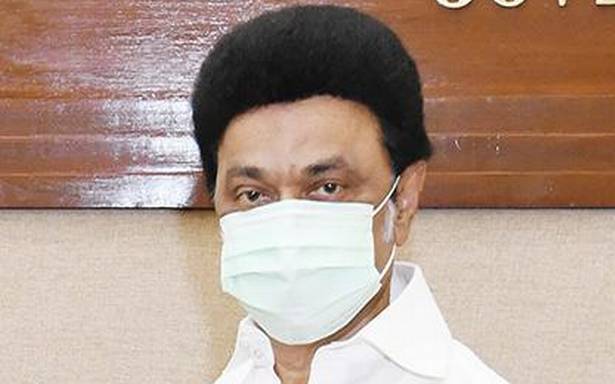 Mr. Stalin said the wages for the loadmen at the DPCs has been hiked to ₹10 per bag from the existing ₹3.25 per paddy bag

Chief Minister M.K. Stalin on Thursday announced new remuneration structure for the employees of the direct purchase centres (DPCs) run by the Tamil Nadu Civil Supplies Corporation to procure paddy from the farmers.

Addressing a State Government function to inaugurate various development projects and distribute welfare assistance in Thanjavur, Mr. Stalin said the wages for the loadmen at the DPCs has been hiked to ₹10 per bag from the existing ₹3.25 per paddy bag. The loadmen were also entitled to receive travelling allowance, he added.

Record clerks and watchmen would receive ₹5,288 per month and ₹5,218 per month, respectively, in addition to ₹3,499 as Dearness Allowance, the Chief Minister said.

He appealed to the DPC employees to ensure a complaint-free procurement exercise during the forthcoming samba/thaladi harvesting season.

Recalling the efforts put in by the DMK Government headed by then Chief Minister M. Karunanidhi in safeguarding the State’s right over the Cauvery water, Mr. Stalin said it was Karunanidhi who had installed the statue of Chola Emperor, Raja Rajan near the Big Temple after the then Union Government denied permission for installation of the statue inside the temple complex.

Speaking on the occasion, School Education Minister, Anbil Mahesh Poyyamozhi said efforts were being made to achieve 100% literacy in Thanjavur district from the existing 81%. Steps were also being initiated to set up a mobile library unit of the famed Saraswathi Mahal Library.

Mr. Poyyamozhi said it had been assessed that agriculture operations were not being carried out in about 7000 hectares and those areas could also be utilised for cultivation.

Reacting to the wage revision, Tamil Nadu Civil Supplies Corporation AITUC Workers Union State general secretary C. Chandrakumar pointed out that hitherto ₹2.05 per paddy bag was being offered as handling charges and ₹1.24 as loading charges to the loadmen.

Though the announcement might be looked upon as a welcome measure, the union had been demanding on ₹10 as the handling charges.

The declaration with respect to the remuneration of record clerks and watchmen might not trigger any cheers among the workers since they were persistently demanding a basic wage of ₹15000 per month, he felt.

He added more important issues such as normal pension for the retired TNCSC employees, holding the field staff alone responsible for loss of weight due to transportation of paddy from DPC to stockyards and others still remain unattended.