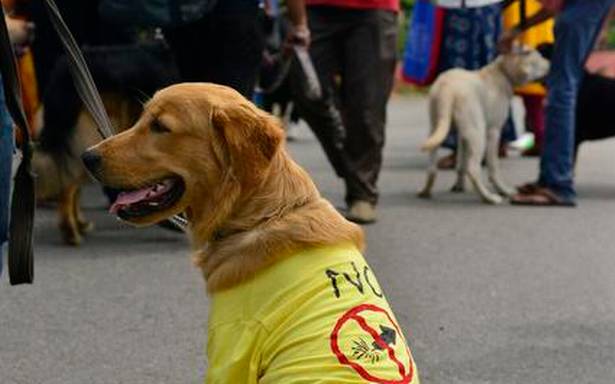 Besant Memorial Animal Dispensary’s (BMAD) Deepavali poster announcing its helpline number says many animals get injured due to firecrackers and some end up in road accidents.

So, how can we celebrate the festival in a responsible manner? Rescuer Aishwarya Prem says awareness is the only way people can be made more sensitive to the plight of animals. Every year, she and her cousin Sangeeth Sudheers knocks at the door of their neighbours in Kanathur on East Coast Road to sensitise them about this issue. “We request them to burst crackers in areas where dog packs are not found,” says Aishwarya, who runs Second Chance Animal Trust.

She says sudden changes in the surroundings with such loud noises and fireworks put stress on dogs and leave them confused. The possible signs of stress include whining and loss of appetite.

“It’s important to keep them hydrated, so place a bowl of water and make sure to replace it as needed,” she says.

Aishwarya suggests that strays be fed early so that they do not puke amidst the pollution and loud sounds.

Dr. R. Sokkalingam, veterinary officer, who in the previous years went about distributing pamphlets on animal care during the festival, says nutritious food, especially protein-based, is important to keep stress levels under control.

At homes, pets are generally put under couches or in extreme cases taken to pet boarding facilities.

“The least we can do is keep the gates open on Deepavali and during heavy rains so that they find a safe refuge,” says Aishwarya.