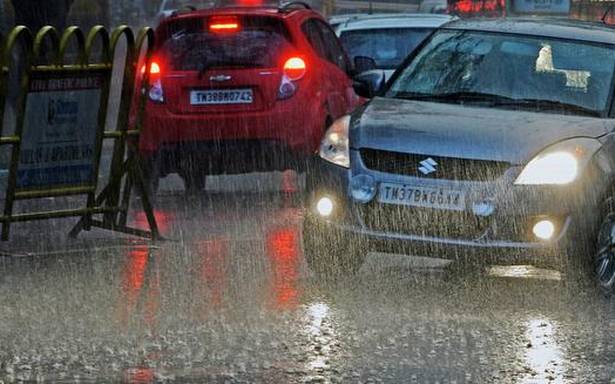 South-West Monsoon this year in Coimbatore will be normal, says the forecast report prepared by the Agro Climate Research Centre at the Tamil Nadu Agricultural University.

Coimbatore’s long-term mean rainfall is 189.8 mm and this year it may see 175 mm, the report says and adds that the deviation of minus 7.8% comes under the ‘normal’ category.

The South-West Monsoon season starts in June and goes on till September. From March to May, Coimbatore gets summer showers, the average of which is around 130 mm.

On Saturday too, parts of the district experienced summers showers in the evening.

The centre head, Professor S.P. Ramanathan, says it has predicted the rainfall based on Southern Oscillation Index and Sea Surface Temperature values of Pacific and Indian oceans and computed using propriety software.

In addition to Coimbatoe, Salem, Perambalur, Thanjavur, Nagapattinam, Krishnagiri, Vellore, Tiruvallur, Chennai and Kanchipuram will also experience minus one to five % deviation in their long-term mean rainfall.

Kanyakumari, Tirunelveli, Theni, Sivaganga, Tiruchi, Cuddalore and the Nilgiris districts will get between one and 10 % more than their long-term average rainfall.

Thoothukudi district may get minus 20 to 25 % rainfall this time.

A rainy day is one that gets more than 2.50 mm rainfall.

In 2017, too, Coimbatore had experienced good South-West Monsoon showers in that it had received 301.10 mm rainfall in 18 rainy days.

05/26/2019 India Comments Off on South-West Monsoon will be normal in Coimbatore: TNAU
India