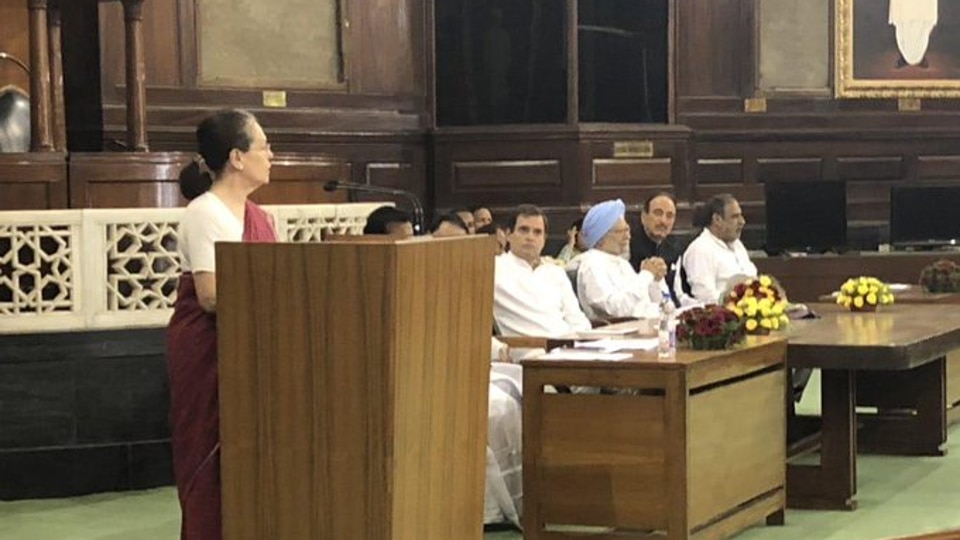 The announcement came at the parliamentary party meeting of the Congress held a week after its president Rahul Gandhi announced his decision to quit the post following severe drubbing in the recently-held general election that saw the Narendra Modi-led NDA storming to power with 352 of the 542 seats polled.

The meeting of the newly-elected Congress Lok Sabha MPs took place ahead of the Parliament session beginning on June 17.

In another tweet, Surjewala quoted Congress chief Rahul Gandhi as saying that “every Congress member must remember that each one of you is fighting for the Constitution, for every person in India irrespective of the color of his skin or belief’.”

The meeting took place in the background of the amid the stalemate over the resignation of Rahul Gandhi as Congress chief. The Congress Working Committee (CWC) had rejected his offer to resign in a fractious meeting on May 25.and authorized him to overhaul the party despite Gandhi’s purported insistence on quitting.

The suspense over whether Gandhi will continue to lead his party lingered even as Congress workers in several cities across the country held demonstrations urging him to rethink his decision to quit following reverses in the Lok Sabha elections.

Saturday was the first occasion when Gandhi interacted with party leaders since the CWC meeting on May 25.

However, he did not meet Rajasthan chief minister Ashok Gehlot and his deputy Sachin Pilot who were at his 12, Tughlaq Lane residence for a meeting with his sister and Congress general secretary for east Uttar Pradesh Priyanka Gandhi Vadra.

On Wednesday, Rahul Gandhi did not meet Delhi Congress president Sheila Dikshit who, along with other party colleagues and workers, staged a sit-in outside his residence to plead with him to reconsider his resignation offer. She conveyed the message through one of his aides.

But the Congress president took to Twitter to congratulate Naveen Patnaik on being sworn in as Odisha chief minister for a record fifth term.

“This is indeed an incredible achievement. My best wishes to him and to the people of Odisha,” he tweeted.