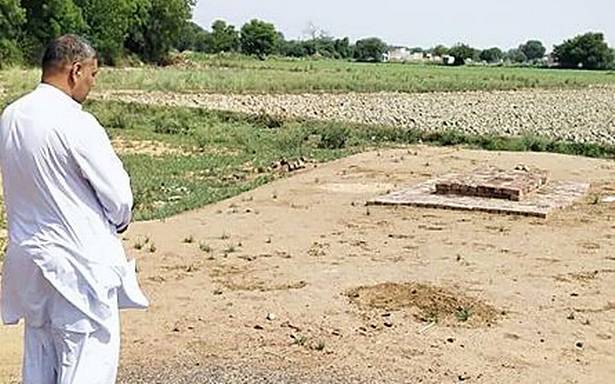 As one drives down the road leading to Bhadani village here, the cremation site of sergeant Vikrant Sherawat, who was killed in an IAF helicopter Mi-17 crash in Budgam on February 27, on the roadside bears a testimony to the apathy of the authorities towards it.

Haryana Chief Minister Manohar Lal Khattar had promised to develop it into a “Shahidi Park” in the memory of Vikrant, but no work has started in the last three months. In fact, Vikrant’s widow still awaits the financial assistance and the job promised to her by Haryana government.

Suman, 29, a post-graduate in Political Science, was promised a job and ₹50 lakh as financial aid, as per the State government policy for battle casualties, by Mr. Khattar, who had come to attend the last rites of the solider.

“He was the only breadwinner of my family. I have two children, a girl aged two and a boy aged five, to take care of. When we enquired about it, the officials told us that it has been delayed due to the model code of conduct,” said Ms. Suman. She said that her family would again take up the matter with the authorities since the elections were now over.

Vikrant’s mother Kanta Devi added that Mr. Khattar, in the presence of his cabinet colleagues had also promised to name a road leading to the village and a school in memory of her son. But she lamented that all promises remained on the paper.

Bhumi Bachchao Sangarsh Samiti leader Shamsher Singh said since a policy was laid by Haryana government for assistance in case of battle casualties, there should be no delay in offering help to such families. “Though the government fights and wins elections in the name of martyrs, when it comes to helping them they are ready with all excuses,” said Mr. Singh.