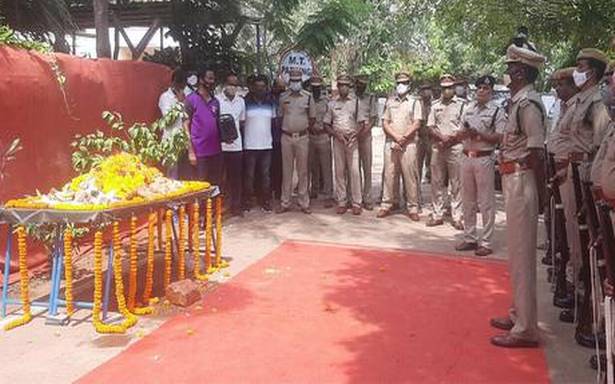 A sniffer dog named Ruby, who served on the police force with distinction for nearly 10 years, passed away due to health issues on Wednesday night in the city.

Police officials in the district conducted a parade and offered floral tributes to Ruby’s mortal remains before laying her to rest at the AR Grounds near Kailasagiri hill on Thursday.

Ruby, a Labrador Retriever, was working with the Visakhapatnam District Police since 2012. She was specially trained at the Integrated Intelligence Training Academy in Hyderabad to detect explosives, which turned out to be one of her core strengths while serving with the Rural police during many VVIP programmes.

Deputy Superintendent of Police (Armed Reserve) R.P.L. Santhi Kumar expressed his grief over Ruby’s death. “She was treated as a family member of the Rural Police department. She can never be replaced and her death is a huge loss to the police force,” Mr. Santhi Kumar said, adding that the department was shocked at Ruby’s sudden demise.

“After completing her training in Hyderabad, Ruby was attached to the Bomb Disposal Squad of the Visakhapatnam District Police. Ruby had taken part in a number of security operations during the visits of Chief Ministers, the Prime Minister and other VVIP programmes, like ruling out the prospects of explosives at public places and meeting venues, apart from rendering her service to Road Opening Parties (ROP) to sanitise areas for the last 10 years,” he said.

The DSP also recalled that Ruby had won laurels for the department by showcasing its skills in a number of State-level and Range-level police duty meets.