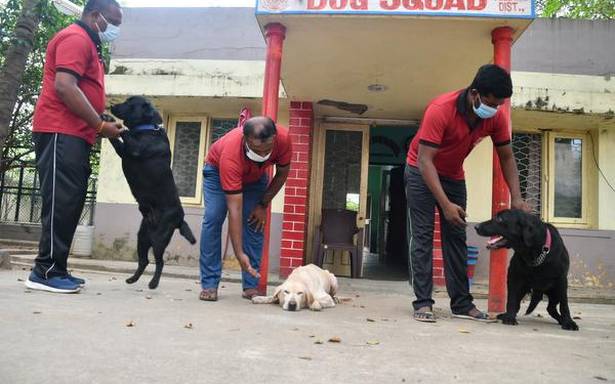 The dog walks out of his small kennel towards his handlers without jumping or barking and curiously smells the black polished boots of Mr. Wilson, one of his handlers.

Constable M. Sasikumar is the second handler who is close to Simba. They spend most of their time with him taking care of his daily needs including bathing, feeding, routine classes like detection by smell and physical training.

Simba returns his gratitude by sniffing the objects or the specified area where he is left free to do his job and provides valuable clues to his handlers. “Simba never barks when he finds explosives during search operations. Instead, he quietly sees his handlers while giving a hint. That comes through training,” said Rajesh Kannan, Vellore SP.

Simba’s sniffing skills were on full display a week ago on December 15 when he was taken to the Jos Alukkas, a gold retail chain showroom at Katpadi Road in Vellore, where 16 kg of gold and diamond jewellery were stolen the previous night.

Once he landed at the spot, Simba pulled Mr. Sasikumar to the rear side of the showroom where a hole was drilled by the suspect over a week. Simba did not stop there. He took the police team to the staircase where the footmarks of the suspect were identified. He took the team to Katpadi Road junction, around 500 m from the showroom, where he smelled the suspect’s scent.

Initial clues provided by Simba were vital in getting an idea of the suspect and his motives, the police said. Subsequently, eight special teams worked on CCTV camera footage around the showroom tracking the suspect in Odugathur village near Anaicut along Jawadhu Hills in Vellore on Monday.

At the kennel built in 1986, Simba retires with his peers once his mission gets completed. Other sniffers are Lucy (9 years), Agni (4 years) and newly joined Sara (3 months old) who are taken care of by constables J. Elagovan, C. Dhanasekaran and S. Gunraj.

They are fed with rice, beef, boiled egg, milk and vegetables every day. On an average, the three sniffers helped solve 80 cases each year. These sniffers are classified for four trade works such as explosives, crime, narcotics and earthquakes. At Vellore, the dog squad is mainly used for explosives and crime works after a year-long training given in Chennai. Each dog is taken care of by two handlers.

The Madras City Police Dog Squad was started under Sub-Inspector of Police Kanniah Naidu in 1952. It was set up in the CB-CID buildings on Mount Road and was shifted to Egmore in 1956. It was the oldest dog squad in the country. The Madras police was the first to use sniffer dogs for detection and tracking.