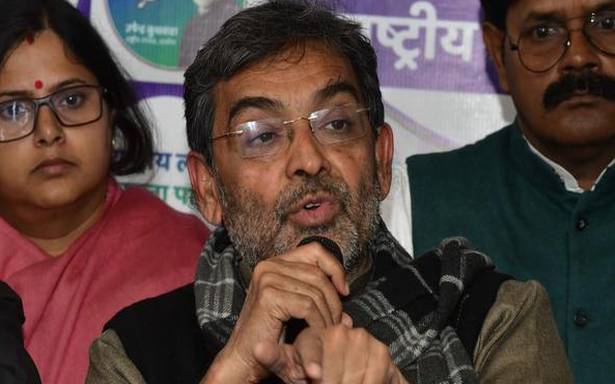 A group of six parties, including the Rashtriya Lok Samata Party (RLSP), the Bahujan Samaj Party (BSP), the All India Majlis-e-Ittehadul Muslimeen (AIMIM) and others, on Thursday announced the formation of the “Grand Democratic Secular Front” alliance for the upcoming Bihar Assembly polls. They declared RLSP leader Upendra Kushwaha as their chief ministerial candidate.

The Lok Janshakti Party (LJP), meanwhile, released its first list of 42 party candidates, which included several senior BJP leaders who recently joined the LJP despite the BJP’s repeated warnings that the party may take action against those contesting the Bihar polls outside the Bharatiya Janata Party (BJP)-Janata Dal-United (JD-U)’s National Democratic Alliance (NDA) in the State.

On the other hand, the RJD is said to have given a party ticket to the wife of don-turned-politician Ramakishore Singh from the Mahnar Assembly constituency. Earlier, senior RJD leader Raghuvansh Prasad Singh had quit the party in protest against the likelihood of Mr. Singh joining the RJD.

The party has also changed the Assembly constituency of Tej Pratap Yadav, older son of party chief Lalu Prasad, from Mahua in Vaishali to the Hasanpur constituency in the neighbouring Samastipur district. The RJD has fielded Mukesh Roshan from the Mahua seat.

“Altogether six parties are here on one platform to form the Grand Democratic Secular Front and it appeals to the people of Bihar to give us one chance to see how Bihar would be a developed State in five years,” said the Front’s coordinator and leader of the Samajwadi Janata Dal (Democratic), Devendra Yadav.

Meanwhile, the LJP released its first list of 42 candidates, which included the names of BJP leaders Rajendra Singh (Dinara), Rameshwar Chourasia (Sasaram), Usha Vidyarthi (Paliganj), Ravindra Yadav (Jhajha), and Mrinal Shekhar (Amarpur). Party leader and spokesperson Ashraf Ansari claimed that, “The LJP has given 20% of 42 seats to women (9), and most of the party’s district presidents too have been accommodated in the list, including several leaders from the BJP and JD(U).”

Earlier, senior BJP leaders had warned that strong action would be taken against party leaders contesting the polls outside the NDA. But the LJP leader said, “Over a dozen BJP leaders are in touch with our party to contest the poll.”

Later, senior State BJP leader and Deputy CM Sushil Kumar Modi took a dig at the RJD: “The bahubali (strongman) against whose induction into the party Raghuvansh Prasad Singh had fought till his last breath, the RJD bulldozed Mr. [Raghuvansh Prasad] Singh’s ideal and respect for poor people by giving a party ticket to his [Ramakishore Singh’s] wife.”