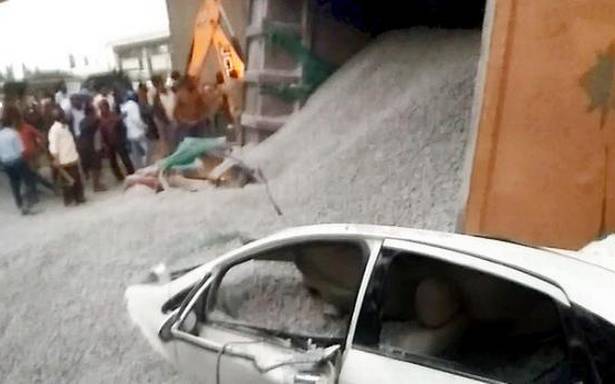 Truck hits divider; falls on 2 cars and a bike

Six people, including two women and a minor boy, were killed and four others injured when a truck toppled and fell on two cars and a bike passing by in Kumbalgodu on the busy Mysuru-Bengaluru highway on Monday evening. The police said rash driving by the truck driver could be the reason for the accident.

The incident occurred around 6.15 p.m., when the truck, laden with tonnes of crushed stones, allegedly hit a divider. As the driver lost control, the truck fell on the two cars and the bike moving next to it. Due to the impact, the four people sitting in the car and the biker were killed on the spot, while Jayaprakash, who was in the other car, died on the way to a hospital. The injured are being treated at Rajarajeshwari hospital.

Soon after the incident, passers-by rushed to help and pulled out the victims buried under the heap.

Traffic movement on the busy road came to a standstill with hundreds of vehicles stranded for a few kilometres.

The Kumbalgodu police rushed to the spot and with the help of a crane removed the vehicles which were buried under the heap of gravel.

A case is registered in Kumbalgodu police station in connection with the incident and the police are looking for the truck driver, who is absconding.