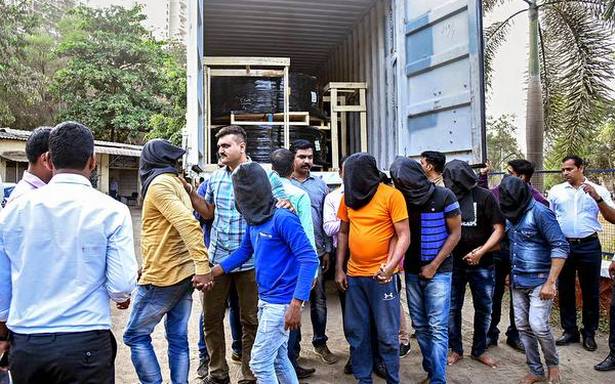 The Crime Branch of the Navi Mumbai police has arrested a gang of six for robbing a 25-tonne copper consignment from Dubai worth ₹1.5 crore last week.

Navi Mumbai Police Commissioner Sanjay Kumar said, “The Crime Branch team has not only busted the gang but also recovered the entire consignment.”

Tushar Doshi, Deputy Commissioner of Police (Crime Branch), said that Sagar’s accomplices were his distant relatives and they all lived in Uran. They have been identified as Chetan Kisan Thakur (40), Arvind Hasuram Gawand (35), Rupesh Ganpat Mhatre (34), Amit Ashok Mhatre (32) and Prasad Pandurang Patil (24).

The police said that accused learnt that the consignment would arrive at Jawaharlal Nehru Port Trust on May 14 and be transported to Silvassa. The accused then stopped the container near Reti Bandar at Ulwe-Belapur road, assaulted the driver and made away with the consignment.

The Crime Branch officers sought the help of informers to trace the accused and picked them up from Pen, Uran and CBD Belapur on May 19. The police said that they arrested the accused and seized the consignment before they could find a customer and strike a deal.

Officials said that the accused have been remanded in police custody till May 26.