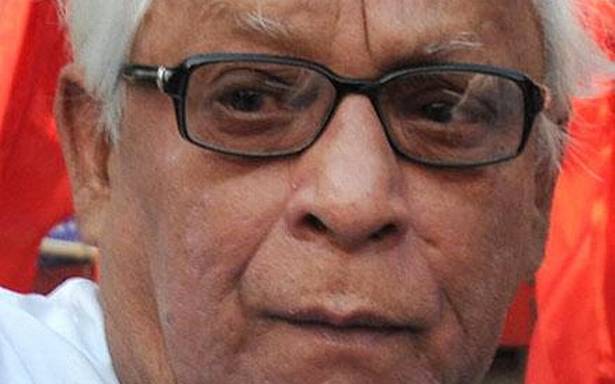 His remarks come a day after Chief Minister Mamata Banerjee accused Suvendu Adhikari and Sisir Adhikari of a conspiracy to allow police to enter Nandigram on March 14, 2007

His remarks come a day after Chief Minister Mamata Banerjee accused Suvendu Adhikari and Sisir Adhikari of a conspiracy to allow police to enter Nandigram on March 14, 2007. Fourteen villagers were killed in the police firing and subsequent violence in Nandigram. The violent movement against land acquisition catapulted Mamata Banerjee to power in the State in 2011.

BJP leader Suvendu Adhikari responded to Ms Banerjee remarks, saying she should read her own book on Nandigram as her views now were contrary to what she had written then.

In a statement issued by the Communist Party of India ( Marxist), Mr. Bhattacharjee said that Left Front government believed in the political and economic idea that “agriculture was our foundation, and industry was our future”.

“But, unfortunately, during the regime of the present government, we have suffered setbacks in agriculture and no significant industry has come to West Bengal in the past 10 years,” he said. Mr. Bhattacharjee raised the issue of corruption, syndicates and extortion and said it had made life difficult for the people of the State.

The veteran Communist leader said that the Left parties, along with Congress and ISF, had come up with the Samyukt Morcha, which alone could bring the State out of the darkness. He appealed to the people to vote for ‘Samyukt Morcha’ in the interest of the people so that a new government could be formed.

“The new government will assure democracy, communal harmony and rights of the working classes in the State,” Mr. Bhattacharjee added.

03/30/2021 India Comments Off on Singur, Nandigram conspirators throwing muck at each other: Buddhadeb Bhattacharje
India