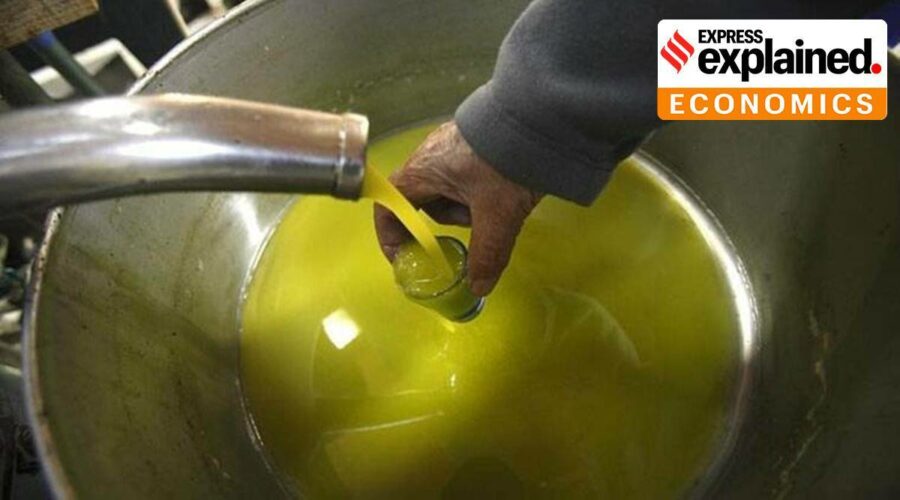 Fuel, food and fertilisers are all globally on fire today. And that is almost history repeating itself after 10 years, with consequences for inflation in India as well 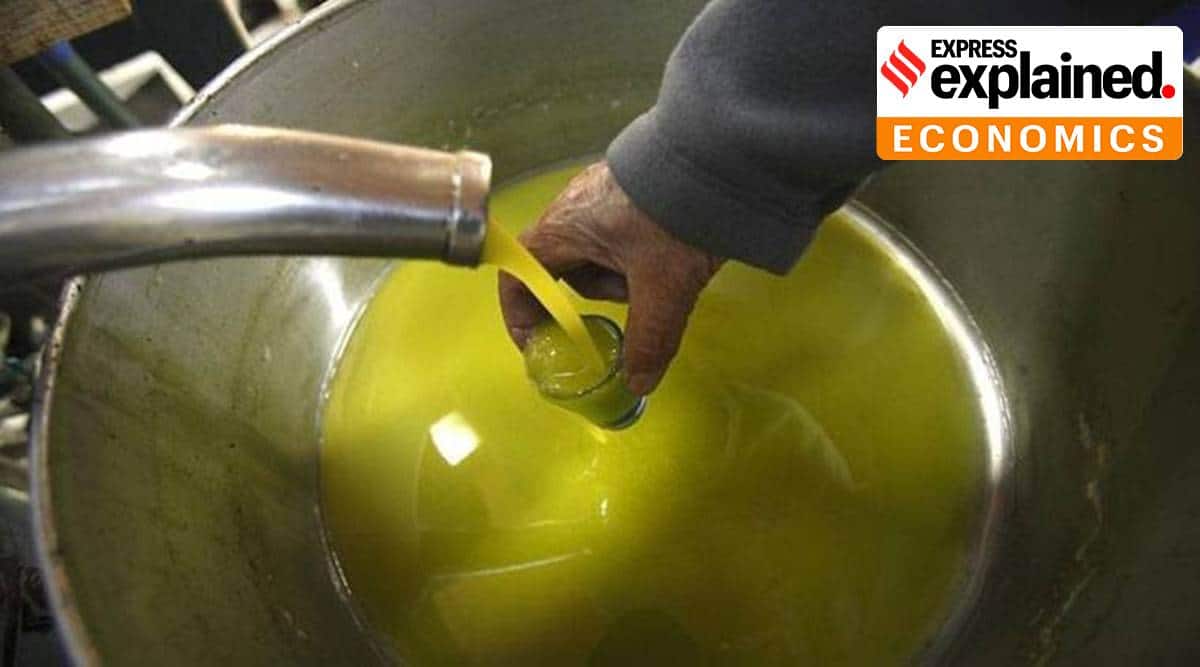 No less significant, though, is the way the FPI has oscillated since the outbreak of Covid-19. In May 2020, when the global economy was in the doldrums, it had collapsed to a four-year low of 91.1 points. From there to a ten-and-a-quarter-year-high now has been quite a climb (see chart).

One reason why petroleum and agri-commodity prices move in tandem is the bio-fuels link. When crude prices rise, blending ethanol from sugarcane and corn (maize) with petrol or diverting palm and soyabean oil for biodiesel production becomes that much more attractive. Cotton, likewise, turns relatively affordable vis-à-vis petrochemicals-based synthetic fibres. Also, since corn is primarily an animal feed, its diversion to ethanol leads to substitution by other grains, including wheat, for livestock use. That, then, pushes up prices of foodgrains as well.

The same happens to sugar, as mills step up the proportion of cane crushed for fermenting into alcohol. 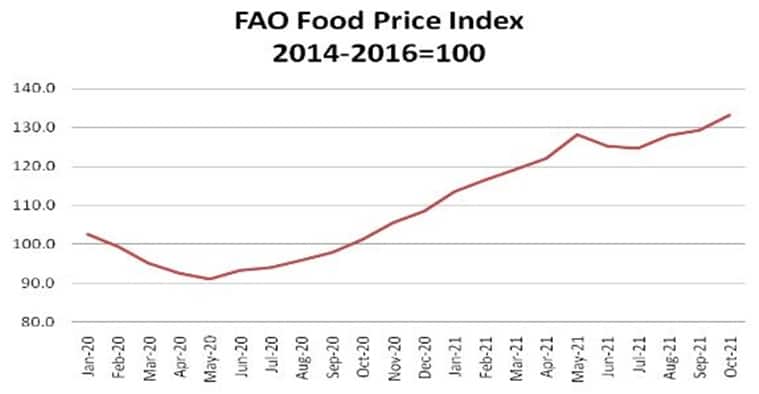 The results of these can be seen in the table. Palm oil prices in Malaysia are currently at over 5,070 ringgits per tonne, with the most-actively traded futures contract at the Bursa Malaysia derivatives exchange hitting a record intra-day high of 5,090 ringgit on October 20. On November 1, the benchmark wheat futures contract at the Chicago Board of Trade closed at $7.97 per bushel, the highest since December 19, 2012.

The present global cotton rates of 125 cents-plus per pound were last seen in July 2011. Corn and sugar prices, too, are ruling way higher compared to a year ago.

But it isn’t the bio-fuels effect alone: Large price increases also tend to rub off on other farm produce through creation of positive “sentiment”. Thus, skimmed milk powder prices averaged $3,627 per tonne at the Global Dairy Trade online portal’s latest fortnightly auction on November 3, the highest since the $3,810 of July 1, 2014. International coffee prices have nearly doubled in the last one year and, like most other agri-commodities, also strengthened along with crude oil in the last three months.

“Sentiment” is, in turn, connected with two things.

The first is, of course, demand returning with revival of economic activity worldwide amid receding pandemic cases and rising vaccination rates.

The second is the flood of liquidity unleashed by the US Federal Reserve and other global central banks, to limit the economic damage wreaked by Covid-19. The US Fed’s total assets — mainly government bonds and mortgage-backed securities that it buys — on its balance sheet has expanded from $4241.51 billion to $8,574.87 billion between March 2, 2020 and November 1, 2021. All this money, combined with the policy-induced ultra-low global interest rates, has found its way into stock markets, start-up investments and also commodities. And since restoration of supply chains hasn’t kept pace with the demand recovery — manifested in congestion at ports, shortage of shipping containers/vessels and labourers yet to fully return to plantations — the overall result has been inflation.

But has the surge in international prices benefited producers, especially farmers? To some extent, yes. Kapas (raw un-ginned cotton) is today selling at Rs 7,500-8,000 per quintal in Rajkot market (Gujarat), well above the government’s minimum support price (MSP) of Rs 6,025 for long-staple varieties.

Soyabean growers are similarly realising Rs 5,000-plus per quintal rates in markets such as Ujjain (Madhya Pradesh) and Latur (Maharashtra), against the MSP of 3,950.

On the flip side, however, farmers are being forced to pay much more for fuel and fertilisers, as their international prices also have shot up. Diesel is now retailing in Delhi at Rs 86.67 a litre. This is higher than the Rs 70.46/litre a year ago, even after the Centre’s recent Rs 10 excise duty cut. 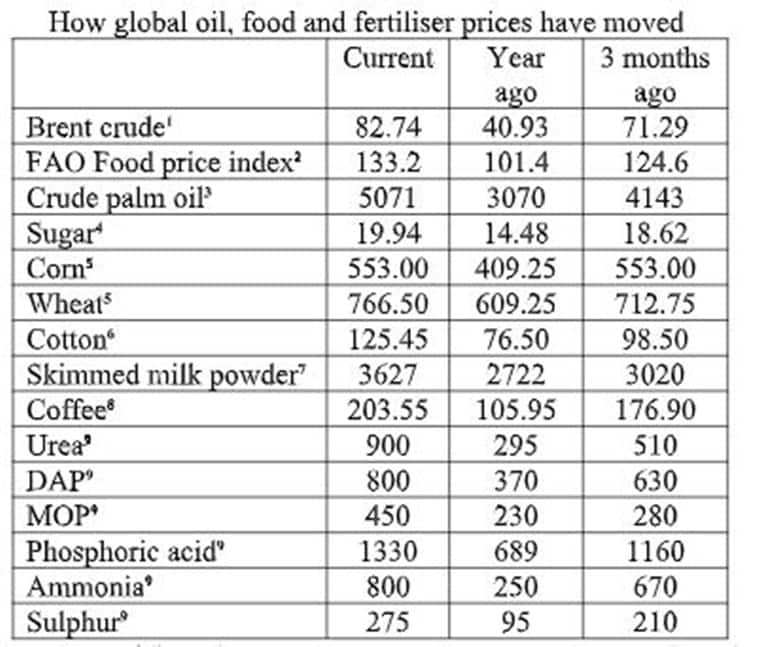 The situation is worse in fertilisers. Di-ammonium phosphate (DAP) is currently being imported into India at $800 per tonne, including of cost and ocean freight. Muriate of potash (MOP) is available for no less than $450 a tonne. These are close to the prices that prevailed during the world food crisis of 2007-08.

Landed prices of urea, on the other hand, have crossed unheard-of levels of $900 per tonne. Together with fertilisers, the prices of their intermediates and raw materials such as rock phosphate, sulphur, phosphoric acid and ammonia have also skyrocketed due to a combination of demand-pull (from higher crop plantings) and cost-push (from oil and gas).

The coming weeks will present a huge challenge for the government to make fertilisers (particularly phosphatic and potassic nutrients) available in reasonable quantities, to enable farmers meet the requirements for their wheat, mustard, potato, onions and rabi pulses crops. That would matter for food prices down the line — at a time when fuel and fertilisers are also on fire.

(Damodaran is National Rural & Agriculture Editor of The Indian Express, and currently on sabbatical as Senior Fellow with the Centre for Policy Research, New Delhi)

11/11/2021 India Comments Off on Simply Put: What links oil and food prices
India