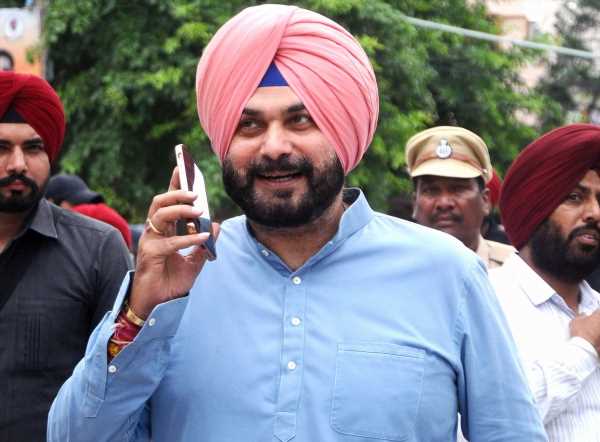 ‘Sidhu’s suggestions regarding formation of the new government were completely ignored, so he stepped down.’

Navjot Singh Sidhu’s surprise resignation as Punjab Congress Committee president has pushed the party back into crisis in the state only months ahead of the assembly polls.

Sidhu’s move is baffling as only 10 days ago, his mutiny against then chief minister Captain Amarinder Singh led to Singh stepping down.

The recent events in Punjab were seen as a victory for Sidhu, which make his decision to step down as PCC chief on Tuesday, September 28, a mystery.

Malvinder Singh Mali, political analyst and former Sidhu advisor, tells Rediff.com‘s Syed Firdaus Ashraf that the Channi government is following the ways of the Amarinder administration and that’s why Sidhu felt the need to resign.

It is surprising that Sidhu resigned even after his demand to replace Amarinder Singh as CM was accepted by the Congress.

There is nothing surprising about this news.

You changed the government in Punjab. But now, you are doing the same thing with the new government.

See who they appointed as the advocate general and director general of police of the state.

The DGP is the same person who gave a clean chit to everyone in the Bargari Sacrilege incident, arrested two (innocent) Sikhs and blamed Pakistan’s ISI for the desecration (of the Guru Granth Sahib).

He was head (of the investigation) at that time for (the) Bargari (incident).

Another questionable appointment is that of Rana Gurjit Singh, who was ousted in 2018 (over allegations of impropriety in the auction of sand mining contracts). Still, he was taken back in the ministry.

Sidhu’s recommendations like that of Kuljit Singh Nagra were never considered.

Therefore, Sidhu’s resignation was not a spur-of-the-moment decision.

I have been telling what the Charanjit Singh Channi government is doing in Punjab for the last five days in my social media posts.

Is it not true that Sidhu was acting as de facto chief minister and wanted to control the Channi government?

This is not true. Channi wants to work with Sidhu and he has no problems with him.

There are others who are creating trouble between them.

Outside forces are creating trouble.

Amarinder Singh tweeted that Sidhu is ‘an unstable person’ and ‘not suitable’ for Punjab, which is a border state.

There is nothing unstable about Sidhu as he sticks to his viewpoint.

This goes against Amarinder Singh’s politics. And he knows this fact.

Sidhu says (clearly that) if you want to finish the mafia in Punjab, you need to change policies of the government. If you do that, the mafia will be finished automatically.

With Pakistan, Sidhu wants peaceful and harmonious relations, which is according to the philosophy of Guru Nanak Devji.

He demands that the Wagah border needs to be opened, but no one agrees with him.

Amarinder Singh says Sidhu is not stable, but he is not stable for those who oppose and reject his viewpoint.

It was speculated that Amarinder Singh was about to meet Amit Shah in New Delhi and, therefore, tge Congress high command sacked Sidhu in a hurry to make him a scapegoat. Is it true?

His suggestions regarding the formation of the new government were completely ignored, therefore he stepped down.

You mean Sidhu’s recommendations for ministerial portfolios were not accepted, therefore he quit?

All his recommendations were not accepted and that was quite obvious.

His recommendation about posts which are very important — like the advocate general or DGP — were rejected.

Another instance is the sacking of Kuljeet Nagra and inducting Gurjeet Rana.

Sidhu has no differences with Channi.

A week ago, it seemed Sidhu had become the kingmaker in Punjab, if not the king. But now it looks like the Congress high command has completely sidelined him.

You agreed to 90 per cent of Sidhu’s demands, but the remaining 10 per cent to which you did not agree, made the 90 per cent null and void.

All this happened very quickly, within a week of Channi becoming the CM.

They felt that if they made Sidhu the CM candidate for 2022 (polls) then he will not speak out now.

Sidhu, however, is made of different mettle.

If you downplay his agenda and try to do politics based on individual personalities then it is going to be problematic.

Is it not harming the Congress’s image in the public eye?

Punjab wants change and the people of Punjab accept those who respond to change.

Channi’s government is walking on the same path as that of Amarinder Singh’s.

Things change on ground only when you take a totally different path.

The Congress will have to take a new path and will have to accept new leadership. It is not that you get new people, but work in old ways.

What message does Sidhu’s resignation send, given that it came days after him unseating Amarinder Singh as CM?

Sidhu has always resigned due to his principles.

He did not quit the BJP (Bharatiya Janata Party) to take any key post in the Congress.

He sacrificed and decided to work on his agenda (of clean politics). He also quit his Rajya Sabha seat and, thereafter, his ministerial post. Now he has resigned as state Congress Chief too.

Sidhu wants change and he will fight for it.

It looks like he is not fit for politics.

He does not support the current ways of politics.

The Congress and Prime Minister Modi are following each other’s development model.

Sidhu wants to change this.

He wants the Punjab model of development with his own ideas. This is different from the established politics of power and race for chair.

In politics, you lose some, you win some. Why is Sidhu not following this?

This is what he wants to change.

Now the system is that one party come to power and loots the public and when it goes into the Opposition, then it tells the ruling party that now it is your turn to loot.

Punjab wants this system to change.

Look at the response the Aam Aadmi Party gets in Punjab even when they have no base in the state. They had 4 members of Parliament from Punjab in 2014.

Therefore, to understand Punjab, you need to change your approach.

Will Sidhu go to AAP?

Out of the question. Sidhu alone is more popular than AAP in Punjab.

His stature in Punjab politics is bigger than that of AAP.

He will not go to any party. He may make his own party, but not right now.

He will try to change the Congress within, requesting the high command to give more freedom to state leaders.

The party is finished in Andhra Pradesh and Madhya Pradesh. Somehow, they have been able to save Rajasthan.

Psephologists say Amarinder Singh’s victory in the 2022 polls was certain and the Congress destabilised his government for no good reason.

Amarinder Singh’s government was not going to come back into power next year. It is very wrong to think that it would have.

All MLAs agree upon it. There was huge anti-incumbency. Therefore, he was changed.

If Sidhu doesn’t remain a part of the Congress, they are not going to not win the next elections.

Do you think the Congress can win Punjab if Sidhu is the CM face?

It is wrong to fight elections on faces.

It is a wrong that that kind of politics is being practiced.

The MLAs pick their leader after elections. And here, you decide the CM face of the party even before contesting elections.

It is undemocratic to play such politics. Elections must be contested on issues, viewpoints and policies.