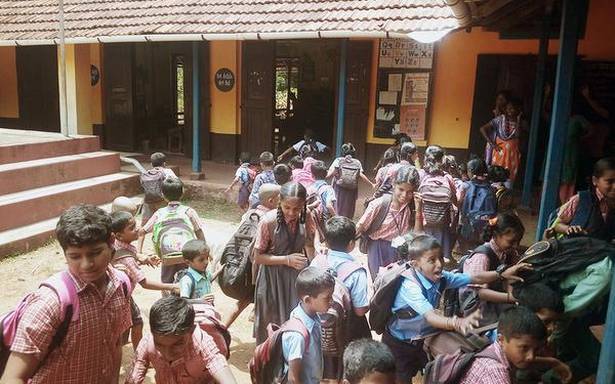 Scarcity of water did not impact the spirit of students and teachers when schools re-opened across Dakshina Kannada on Wednesday.

Teachers of the Government Higher Primary School in Gandhinagar got two tanks of water on Tuesday and one tank of water on Wednesday morning.

“We filtered this water through a water purifier and provided it to children to drink. As supply of water through tankers has been assured, there is no problem in running classes full day,” said Yashoda Devi, headmistress of the school, where 115 students study in Classes 1 to 8.

Teachers in the Goverment Urdu Higher Primary School in Kudroli that also houses the Moulana Azad Model English Medium School were a little upset as they are yet to get water for their overhead tank meant for toilet use. “It is over six months now that the water supply line linked to the overhead tank (over the toilet block) has been under repair. We are yet to restore water to this block,” said a staff member of the school where 123 students study.

The school reopening function was held in a grand manner in several government and aided schools.

More than 100 of the 180 students of the Government Higher Primary School, Gandhi Nagar, participated in a march outside the school that preceded the reopening function. Ten new students were welcomed with flowers and were, along with other students, later offered sweets and milk. Several parents visited the school to enrol their children.

The march taken out by nearly 100 students of the Government Higher Primary School, Bokkapatna, moved a local resident, who offered chocolates to all those who took part in it. These students were also offered biscuits and soft drinks.

The Government Secondary School and the Rosario English Medium Higher Primary School will hold a formal reopening function on Thursday.