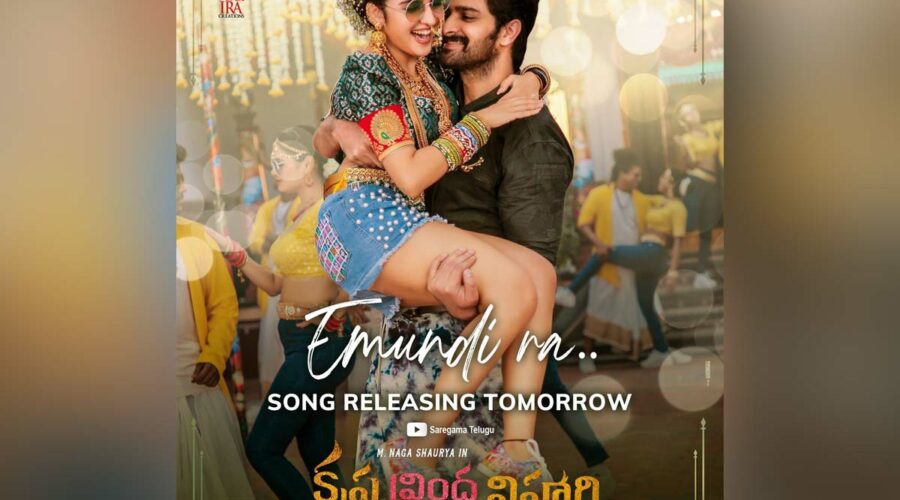 Naga Shaurya starrer Krishna Vrinda Vihari is helmed by Anish R Krishna and is funded by Ira Creations by Usha Mulpuri. The actor is pinning lot of hopes on this film.  The promotional activities of this romantic and comedy drama has been started. Today on the occasion of Eid, the makers of Krishna Vrinda Vihari  revealed that  the lyrical video of a foot tapping dance number, Emundi Ra  will be released tomorrow. The makers confirmed the same by releasing a new poster where the actress Shirley Setia is seen on the lap of Naga Shaurya.

The makers have already released a romantic song ‘Varshamlo Vennella’ from the film  which was composed by Veteran musician’s son Mahati Swara Sagar. Earlier, the  teaser was released to an overwhelming response.

Krishna Vrinda Vihari  has cinematography by Sai Sriram  and Tammiraju is the editor. The movie also has  Rahul Ramakrishna, Satya, Vennela Kishore,  Brahmaji and others play other important roles..

The  upcoming film will see Naga Shaurya in the role of a Brahmin, where Shirley Setia will be seen as  the actor’ love interest. Yesteryear actress Radhika Sarathkumar will be seen in an important role in this drama.

The makers of Krishna Vrinda Vihari  are determined on taking the film to another level and have started promotional campaigns as well.