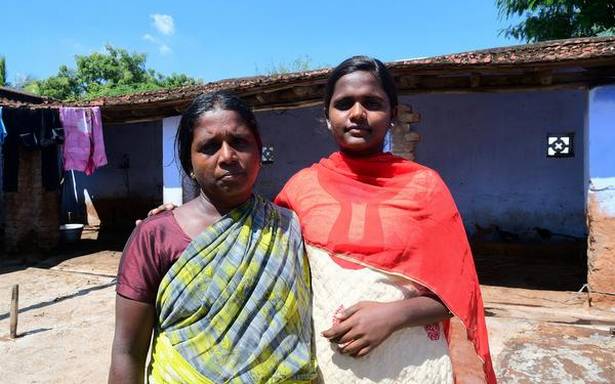 Sometimes, Bhagavathy had to take her cows grazing even as she prepared for the exam

The 7.50% reservation ensured by the Tamil Nadu Government for government school students in the medical admission has done wonders in the life of a poor Scheduled Caste girl student.

When a private bus company conductor Mariappan from Thenkalampudur near here died of cancer, his wife Samuthirakani, a farmhand, and his three daughters and a son were virtually on the streets. With little revenue she was getting from her three cows and the wages as a farm worker, the poor widow vowed to provide better education to her children.

After selling the land the family had, Samuthirakani admitted her first daughter in nursing and now she is doing her postgraduate programme in Coimbatore and the son, after getting a degree in mechanical engineering, is undergoing coaching for competitive exams. The mother’s tireless work ensured a bachelor’s degree to another daughter.

Her last daughter M. Bhagavathy, who lost her father when she was just 6 years old, wanted to become a doctor. She was an outstanding student of Adi Dravida Government Higher Secondary School at nearby Nallammalpuram and scored 516 out of 600 in the Plus Two public exam in 2019. However, she could score just 111 marks in the NEET in 2019.

“Since my mother always wanted me to become a doctor, my mom sold one of our three cows and borrowed from a moneylender to pay my fees of ₹74,000 at a private coaching centre in Palayamkottai and the hostel fee as well,” Bhagavathy recalls.

Instead of feeling discouraged, poverty made Bhagavathy more determined and work hard in the coaching centre till the small hours. As she had to pay ₹7,500 for the hostel, Bhagavathy left the hostel once the coaching was over within the first five months and started taking the tests regularly as a day-scholar.

While preparing for NEET, she also had to take the cows for grazing at times and milk the animals whenever her mother was held up in the farm.

The hard work and perseverance has paid rich dividends as the girl has now scored 364 in NEET and ultimately bagged a seat in Tirunelveli Medical College. This time, the widow’s ear studs and rings were sold to pay Bhagavathy’s tuition fee.

“I want to purse my postgraduate programme either in neurology or paediatric medicine. I will work hard to achieve this dream too,” says Bhagavathy.