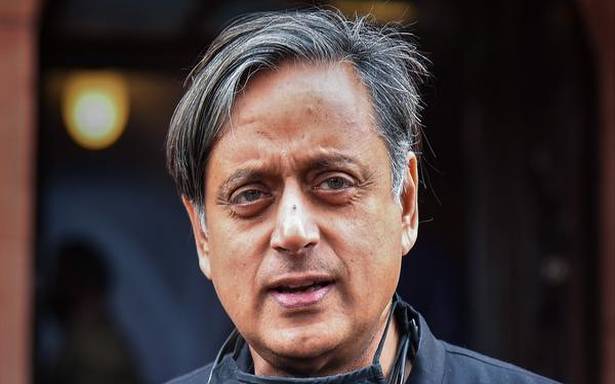 Mr. Tharoor continued to react against the stand of the Congress party on the K-Rail project

KPCC president K. Sudhakaran has issued a warning to MP Shashi Tharoor, who had publicly expressed his views against the party’s decision on the K-Rail (SilverLine) project.

An explanation has been sought from Mr. Tharoor on the subject, he told media in Kannur on Sunday. All party MPs must fall in line with the party’s decision. Mr. Sudhakaran also clarified that Mr. Tharoor would not be in the party and the party has a strict stand in the regard, he reminded.

Mr. Sudhakaran’s statement comes as Mr. Tharoor continued to react against the stand of the party and the Front on the K-Rail project and praised Chief Minister Pinarayi Vijayan in public.

Mr. Tharoor’s failure to sign the letter sent by UDF MPs to the Union Railway Minister against K-Rail had led to a major controversy.

Mr. Tharoor had said that he could not take a stand on the K-Rail project without studying it well and that he did not sign the letter as no such study had taken place.

The Congress MP said the fact that he did not sign the letter does not mean that he supports K-Rail. K-Rail raises important questions. Environmental impact, economic viability, and public concerns, he added.

He said the police in the State is unable to prevent the killings. It was evident in in Alappuzha. They do not have an intelligence system. It is the police who have mixed politics and inactivated the police. Pinarayi Vijayan has no control over the Kerala Police, he opined.

Admitting that the party understands that it was wrong to oppose to the Gadgil Commission report, Mr. Sudhakaran observed that time has proved that the P.T. Thomas stand on the issue of nature conservation is correct.

12/26/2021 India Comments Off on Shashi Tharoor will be removed from Congress if he failed to fall in line with party: K. Sudhakaran
India