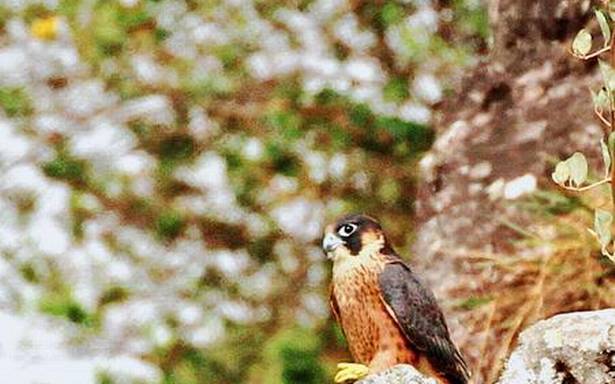 The Shaheen Falcon, one of the fastest birds in the world, is thriving in the Nilgiris. However, lack of understanding of the population trend coupled with threats to the falcon’s nesting grounds could pose a serious threat to their survival in the district in the future, experts warn.

The Shaheen Falcon, a non-migratory sub-species of the peregrine falcon, is known for reaching speeds in excess of 300 km an hour while diving to capture prey and are listed as being “vulnerable” in the International Union for Conservation of Nature (IUCN) Red List of Threatened Species. However, in the Nilgiris, they seem to be thriving, with experts identifying at least eight nesting sites.

Samson Arockianathan, a research scholar in the Nilgiris, who documented nesting sites of the species between 2014 and 2016, said that there were anywhere between 25 and 30 individuals which were resident in the Nilgiris.

“The Shaheen Falcon can live in a variety of habitats, and we have seen them from the low altitude, arid landscapes of Thengumarahada to the upper slopes of the Nilgiris flying over Doddabetta Peak,” said Mr. Arockianathan, who was the lead author of a paper published by the Journal of Threatened Taxa published in 2017 about the species in the Nilgiris. B. Ramakrishnan, assistant professor at the department of zoology and wildlife biology at the Government Arts College in Udhagamandalam, said that as there had been only a preliminary study done to ascertain the extent of the habitat used by the falcons in the Nilgiris, it was difficult to gauge whether the population was in trouble. “However, one concern we have is that the birds prefer to nest in rocky outcrops, and many of the nesting sites which they currently use are close to human habitations or tourist locations. We hope that the Forest Department can identify these areas and regulate tourism to ensure that the falcons’ breeding season is not disrupted,” he said.

M. Santhanaraman, a lawyer and wildlife enthusiast who recently photographed a pair of Shaheen Falcon in the Nilgiris, said that another concern was that the nesting sites of the falcons were usually found in areas which fell outside areas protected by the Forest Department and on revenue lands.

“As these sites are found among rocky outcrops and even tea plantations, there is a chance that cattle herders could set these patches of land on fire to promote better growth of grasslands, destroying nesting areas of the falcons, he said.