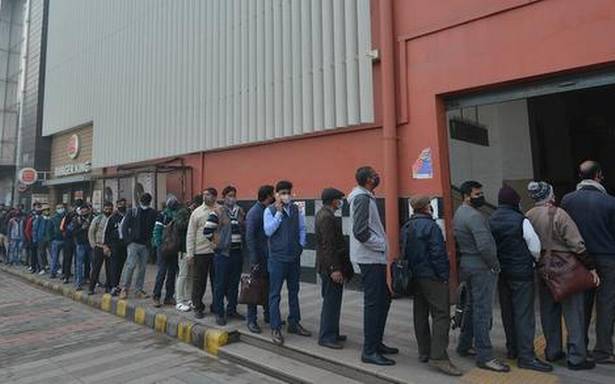 Governments are holding off stringent restrictions for now

A spike in COVID-19 infections has been reported in several States though most are yet to impose significant restrictions.

Delhi has seen an 86% rise in daily new cases on Wednesday from Thursday with at least 238 confirmed cases of the Omicron variant. Despite the increase in positivity rate, the Delhi government has for now decided to abstain from stricter restrictions as it fears that might trigger a migrant exodus.

Maharashtra has reported 85 new cases of the Omicron variant amidst recording 3,900 new COVID-19 cases and 20 deaths on Wednesday. Of the new cases reported, 38 had no history of international travel.

Meanwhile, coastal Goa’s active cases surged to 635, with the State reporting 170 new infections today — a nearly four-fold rise in cases in ten days which has set alarm bells ringing across the State as it gears up for New Year’s eve. Goa Health Minister Viswajit Rane said this was similar to the rise that occurred from April-May earlier this year. Despite the surge in cases, the Goa government has as yet not imposed a night curfew in the coastal State so as to not affect the tourism business till New Year’s day.

Tamil Nadu recorded 739 fresh COVID-19 cases on Wednesday. There were eight deaths in the State, while the active caseload stood at 6,654. So far, there have been 46 confirmed cases of the Omicron variant.

Karnataka on Wednesday reported 566 new cases of COVID-19, with Bengaluru Urban reporting 400 cases and four deaths. While the positivity rate for the day touched 0.52%, the Case Fatality Rate (CFR) touched 1.06%. Five new cases of the Omicron variant of COVID-19 have been reported in Karnataka, taking the total number to 43. Confirming this in a tweet on Wednesday, Health and Medical Education Minister K. Sudhakar said that out of the five new cases, four have a history of international travel from the United States, Dubai and Ghana. The fifth person travelled from Mumbai to Bengaluru by flight. “All positive persons have been isolated and primary and secondary contacts have been identified and tested,” the Minister’s tweet said.

Kerala reported 2,846 fresh cases of COVID-19 on Wednesday when 69,852 samples were tested. With 12 deaths due to COVID-19 reported on Wednesday, and 199 mortalities accounted for as per the Supreme Court’s guidelines, the death toll in the State has gone up to 47,277. As many as 1,494 cases were breakthrough infections in fully vaccinated citizens; 193 had received a first dose of vaccine; 854 were unvaccinated.

Andhra Pradesh identified ten more cases of infections due to the Omicron variant of the novel coronavirus on Wednesday. For the first time in the State, three contacts of foreign returnees who were infected with the Omicron variant also contracted the virus. So far, the State has reported 16 cases of Omicron infections. Meanwhile, the State has reported no recent deaths due to COVID-19.