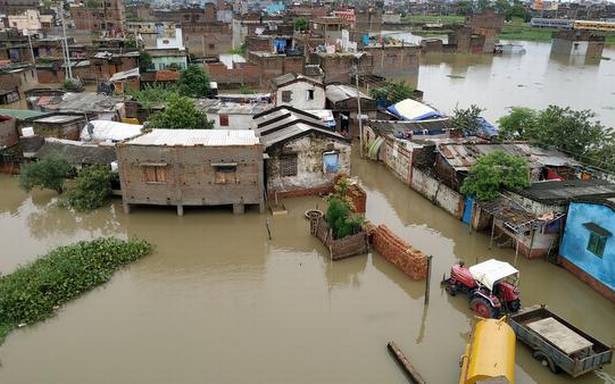 Several districts in the border areas of north Bihar are facing flood threat due to heavy rainfall in the catchment areas of Nepal. The movement of trains too has been affected.

Sources in the Water Resources Department said 11 districts are facing threat as the water level in Bagmati, Kamala Balan, Kosi, Gandak, Burhi Gandak and Adhwara group of rivers along with local rivers are in spate. Birpur in Supaul district received 140 mm rain on Saturday and Chanpatia in West Champaran district 190 mm leading to inundation of several villages disrupting traffic and forcing people to take shelter on highways etc.

Deputy Chief Minister Renu Devi, who hails from flood-prone West Champaran district, on Saturday reviewed the situation and the steps taken for transfer of gratuitous relief of ₹6,000 to the likely flood-affected people. The Dy CM also asked officials to make arrangements for COVID-19 vaccination facility at the relief camps and also take special care of pregnant women, lactating mothers, senior citizens and persons with disabilities.

Due to incessant rains in the last one week, flood water entered a dozen villages in five blocks of Araria and Purnia districts forcing people to shift to safer places. Palasi, Kursakanta and Sikti blocks in Araria district and Baisi and Baisa blocks of Purnia district have been affected while several other blocks face the threat from the rising rivers putting district administrations on high alert. “Over half a dozen villages in the Sikta block are disconnected from the sub divisional headquarters,” said local CPI(ML) MLA Birendra Gupta.

“Movement of several mail and express trains have either been diverted or cancelled due to the water level at bridge No. 248 between Sugauli-Majhoulia in Muzaffarpur-Paniyahawa section,” said chief public relations officer of East Central Railway Rajesh Kumar.

Pictures of people crossing floodwaters on tractors, bikes, cycles and wooden cots with the sick kin and cattle, have been coming from affected villages.