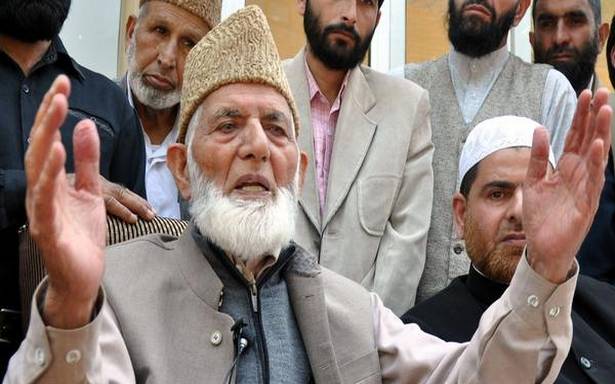 Under strict house arrest for around a decade, Geelani developed "breathing complications" on Wednesday night around 10:30 p.m. and breathed his last, the family sources said.

Of late, Geelani, a resident of Sopore, was battling with severe lung ailments and dementia. He was looked after by his sons, who were allowed by the administration to visit him.

There is no official word on the cause of death.

Meanwhile, police sources said the security arrangements were being made for the final rites of Geelani, who had desired to be buried at Srinagar’s ‘Martyrs’ Graveyard’ where most militants and separatist leaders are buried. However, the police would ensure the funeral is attended by a limited number of his relatives.

"Security has been tightened across the Valley," a police official said.

Geelani, who is a three-time elected legislator from north Kashmir’s Sopore, was active in the political landscape of J&K for around five decades. He served as a senior member of now-banned Jamaat-e-Islami (JeI) and also headed the hawkish faction of Hurriyat, which opposed any unconditional dialogue with the Centre and advocated J&K’s accession with Pakistan.

Geelani resigned as head of the Hurriyat in June 2020, eight months after the Centre ended J&K’s special constitutional position. "Saddened by the news of Geelani sahab’s passing away. We may not have agreed on most things but I respect him for his steadfastness and standing by his beliefs. May Allah Ta’aala grant him jannat and condolences to his family & well-wishers," former chief minister and Peoples Democratic Party (PDP) president Mehbooba Mufti said, in a tweet.