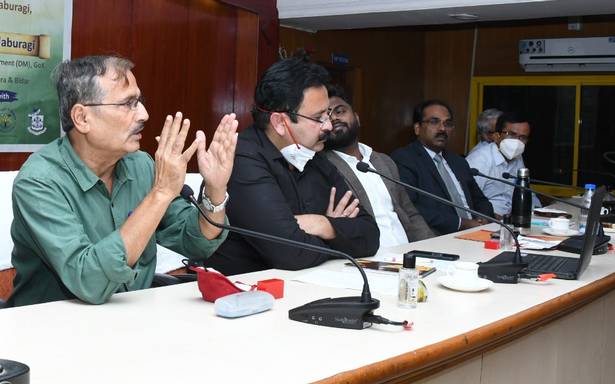 The teams of seismologists that visited tremor-hit areas in Kalaburagi, Vijayapura and Bidar districts for two days found ‘new indications’ that are specific to the region in connection with the mild earthquakes recorded recently.

They shared their findings with mediapersons on November 9 after a meeting with senior officials at the district administrative complex in Kalaburagi.

Dr. B.C. Prabhakar, professor (retd.) of geology, Bengaluru University, who was a part of one of the teams, said that limestone layers in Kalaburagi district and sand layers in Vijayapura district gave new indications on the frequent earthquakes in the region.

“The layers inside the earth in Kalaburagi and Vijayapura districts are similar, with the former having limestone and the latter sand. However, we need to have a deeper seismological study for a better understanding,” Mr. Prabhakar said.

When asked whether heavy rainfall over the last couple of years was the cause of the tremors, Mr. Prabhakar said that he would not dismiss the possibility.

“Most of the tremors in the region are recorded during the monsoon. The earth layers in the region were made of limestone. The chemical reaction of limestone when coming in contact with water may cause withering of the limestone layers and create a vacuum. The collapse of layers would, in turn, result in movement of the earth’s surface, and it is easily felt in the region as the surface is made of loose black soil,” Mr. Prabhakar said.

Based on his observations of the earthquakes, Mr. Prabhakar said that a tremor in Kalaburagi district measuring 4.1 magnitude on the Richter Scale appeared to be the peak of the tremor events in the region.

“There is little possibility of tremors having more intensity than this in the near future. People need not worry. To be on the safer side, the district administrations are working on constructing sheds with lighter material in the tremor-hit villages,” he said.

Pointing to people’s apprehensions that the National Thermal Power Corporation’s plant at Kudgi might be causing the tremors in Vijayapura district, Mr. Prabhakar said that the tremors are caused owing mainly to the pressure created inside the earth following a clash of the various layers, and not due to human activity.

“There is evidence that large-scale mining activity and gigantic dams could cause minor tremors. But, there is no evidence of power stations causing earthquakes. Things like power stations are tiny objects on the massive earth, just like an ant on an elephant, and they cannot disturb the inner layers of the earth,” he said.

He would not recommend shifting the villages that were repeatedly hit by tremors.

“There is not an inch of place on the earth that is not prone to earthquakes. The earth records around 10 lakh earthquakes every year. If we go on shifting the habitats that recorded earthquakes, the entire Nepal will have to be shifted. The tremors recorded in the region were less than 4.0 magnitude on the Richter Scale, and they are very minor ones. We are on the stable landmass of south India, and there is no need for worry,” Mr. Prabhakar said.

Three teams, each headed by two seismologists, visited the tremor-hit areas in Kalaburagi, Vijayapura and Bidar district on November 8-9.

Manoj Rajan, Commissioner of Karnataka State Disaster Management Authority (KSDMA), who coordinated the teams’ movements, said that a comprehensive report compiling the findings of all the teams would be submitted to the government within five days.