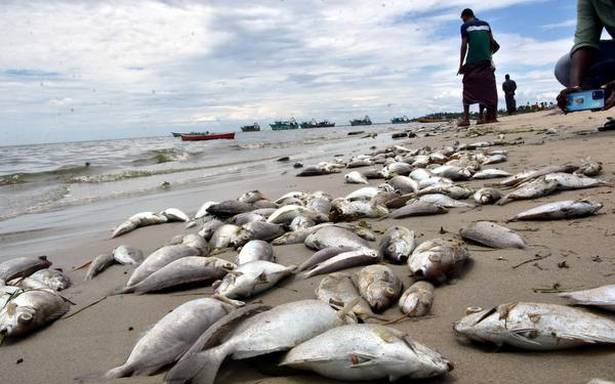 CMFRI studying the phenomenon with other agencies

In a rare phenomenon called algal bloom, the sea has turned green in Gulf of Mannar in Ramanathapuram district – from Pamban to Vedhalai, and Periyapattinam to Keelakkarai – in the past few days.

When thousands of fish washed ashore, fishermen were alarmed. According to R. Jeyakumar, Principal Scientist with the regional centre of Centre for Marine Fisheries Research Institute, a green algae called noctulica scintillans occurs during September and October – the window period between the southwest and northeast monsoons. This rapid increase of algae population happens due to a combination of factors such as rise in sea temperature and low wind condition. Because of the low wind, the algae which thrives on nutrition, settles inside the bay region, because of the static water caused due to low wind and without scope for dispersion.

This phenomena started 12 to 14 nautical miles off Rameswaram coast in the Gulf of Mannar and migrated into the Keelakarai bay, causing death of fish species such as eel which thrive in coral reefs and never migrate. Other fish species had migrated away from the algae. Mr. Jeyakumar said, “This is not the first time that this is happening. It occurred in 2018, and for the past three consecutive years since 2018.” Near the shore, a green and blue florescence is witnessed at night off Keelakarai.

“We are coordinating with INS Parundu, the Indian naval air station in Uchipuli, to study the coast in Thondi region, and also with the Satellite Application Centre in Ahmedabad to gauge the chlorophyll content of the algae. Bases on these findings, we’ll advise fisherfolk involved in cage farming so that they can move the cages, if need be,” Mr. Jeyakumar said.

Meanwhile, the Ramanathapuram district administration has started clearing the algae from the sea.