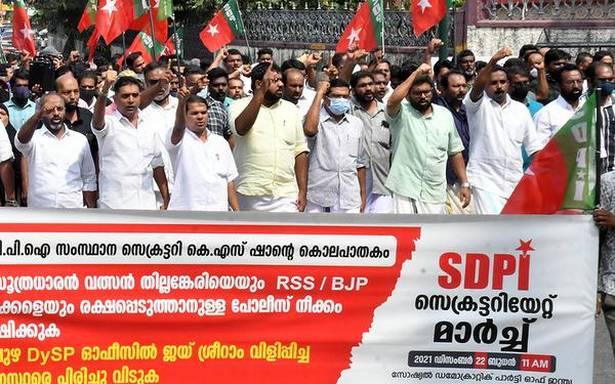 The party with its roots in SIMI is known for religious vigilantism and violence.

Shan was hacked to death, allegedly by workers of the Rashtriya Swayamsevak Sangh (RSS), and some SDPI activists now stand accused of carrying out a ‘revenge murder’ — that of the Bharatiya Janata Party’s OBC Morcha State secretary Ranjith Sreenivas — just 11 hours later.

M.K. Faizy, the national president of the SDPI, later clarified to The Hindu that Mr. Usman was only reiterating the fact that the party cadres would not be cowed down by such attacks but instead would be more resolute in their “democratic fight against fascism”.

The track-record of the SDPI and its ideological progenitor, the Popular Front of India (PFI), however, belie the claims of being secular and democratic. With its roots in the proscribed Students Islamic Movement in India (SIMI) and the National Democratic Front (NDF), which came into being in the aftermath of the demolition of the Babri Masjid, the PFI was formed following a merger of the NDF with the Karnataka Forum for Dignity and the Manitha Neethi Pasarai (Forum for Human Justice) in Tamil Nadu in 2006.

While the PFI is an organisation of ultra-religious Muslims which draws heavily on the Muslim victimhood narrative, the SDPI, floated as its political arm in 2009, is a cadre-based party registered with the Election Commission of India with the stated aim of striving for social democracy, for equal representation and socio-economic empowerment of Muslims, Dalits and Adivasis. The party has a negligible number of non-Muslims, though.

While the PFI lays extra emphasis on legal activism, it has been accused of fomenting religious vigilantism and violence under the guise of ‘self-defence’, even citing blasphemy as in the palm-chopping case of 2010 in Kerala. While the Jharkhand government banned the PFI twice, the States of Karnataka and Uttar Pradesh have sought a national ban on the PFI and the SDPI.

In a paper on the ‘Crisis of Secularism and Changing Contours of Minority Politics in India: Lessons from the Analysis of a Muslim Political Organisation’, published in Asian Survey, authors R. Santhosh and Dayal Paleri of IIT-Madras argue that the politics of the PFI is “characterised by a reconciliation of secular liberalism, including the use of extensive legal pragmatism and a politics of defensive ethnicisation, calibrated through an exclusivist, instrumental use of religion”.

This reconciliation, they observe, is articulated through a language of self-defence, which “subsumes legal, political, and physical forms of protecting the community — and by extension, Islam, the religion, as a moral community — from Hindu nationalists, blasphemers, and those who violate its moral boundaries”. In form and network, it is eerily similar to its arch-rival ultranationalist Hindu outfits, they contend.

Critically, the advent of the SDPI and its brand of politics foregrounding a religious identity have posed a threat to traditional Muslim parties like the Indian Union Muslim League (IUML) in Kerala. While it has committees in 14 States and representation in local bodies in West Bengal, Bihar, Rajasthan, Uttar Pradesh, Karnataka, Kerala, Tamil Nadu, Pondicherry and Andhra Pradesh, the SDPI puts social activism — the anti-Citizenship Amendment Act protests that saw several cases foisted on it, to name one — ahead of electoral performance. When the UP government denied it permission to hold a ‘democracy conference’ in Muzzafarnagar on December 19, it secured the permission of the High Court to conduct the event. In Karnataka, where it stands accused of rioting and revenge killings, the party improved its local body tally from 70 seats in 2015 to 225 in 2020, while in Kerala, it has about 125 local body seats. A Lok Sabha constituency each in Kerala and Karnataka and an assembly seat in Karnataka also saw the SDPI garner a share of Muslim votes in the last elections. While in Karnataka, it withdrew candidates from several assembly constituencies with the aim of defeating the BJP, the party has tactically supported the Congress and the CPI(M) in some local bodies in Kerala.

Observers, however, think that given its dichotomous nature, the SDPI’s ascent as a political alternative for Muslims is in tandem with the delegitimisation of secularism and the credibility crisis of conventional Muslim parties. “Ironically, it will provide fodder to the Hindutva campaign of othering Muslims and in turn, their clamour against Islamic extremism,” says Mr. Santhosh, a faculty member at IIT-Madras.