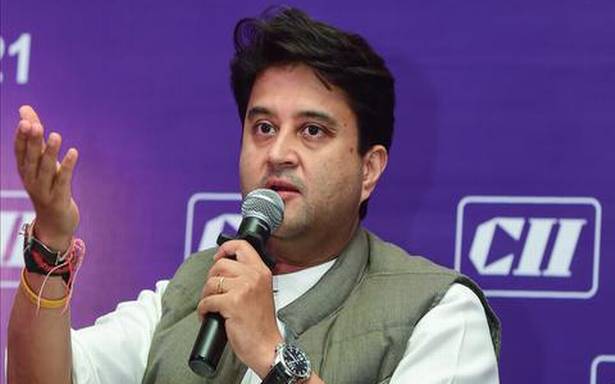 With the current tax structure on ATF, “you cannot have a robust civil aviation sector. I am very clear on that,” the Civil Aviation Minister said

Appealing again, Civil Aviation Minister Jyotiraditya Scindia on Friday urged States and Union Territories to reduce the tax on jet fuel as it will help in increasing air traffic.

The civil aviation sector, which was significantly hit by the coronavirus pandemic that had also resulted in the suspension of scheduled domestic and international flights, is slowly coming back on the recovery path, and air traffic is nearing pre-COVID levels.

Against this backdrop, Mr. Scindia has been urging States and UTs to reduce Value Added Tax (VAT) on Aviation Turbine Fuel (ATF), which accounts for a major chunk of an airline’s operational costs.

Addressing the conference of the Ministers of Civil Aviation from States and UTs here, he stressed the cooperation and support of all stakeholders for strengthening the civil aviation sector.

The Minister has appealed to the States and UTs to bring down VAT on aviation fuel as it contributes majorly to the operational cost of the flights, according to an official release.

In recent months, there has been a surge in fuel prices.

Mr. Scindia also thanked various States that have drastically cut the rates, saying that they have gained larger air traffic movement within a short period of the reduction.

On Thursday, the Minister said that seven states have slashed their VAT on the fuel, and he was expecting more states to follow suit.

With the current tax structure on ATF, "you cannot have a robust civil aviation sector. I am very clear on that," he had said.

The sector has a large cost-benefit ratio and also huge employment potential, he said on Friday, and asked States and UTs to facilitate new airports by swiftly handling the land allotment issues.

Officials at the Civil Aviation Ministry on Thursday said the sector has almost reached the pre-COVID level in terms of traffic and will continue to grow further.

On Friday, the Minister also said that the number of airports will be more than 200 by 2023-24 and also emphasised setting up at least one heliport in each district in collaboration with States/UTs.

About seaplanes, Mr. Scindia said States should provide capital support for the initiative, as per the release.

A booklet ‘Access: The Photo Digest-Demystifying accessibility in Civil Aviation’ was released at the conference, with the aim of creating awareness about accessibility needs and corresponding travel-related facilities for divyangjans.

Minister of Social Justice and Empowerment Virendra Kumar and Minister of State for Civil Aviation V.K. Singh (Retd), among others, also participated in the conference.