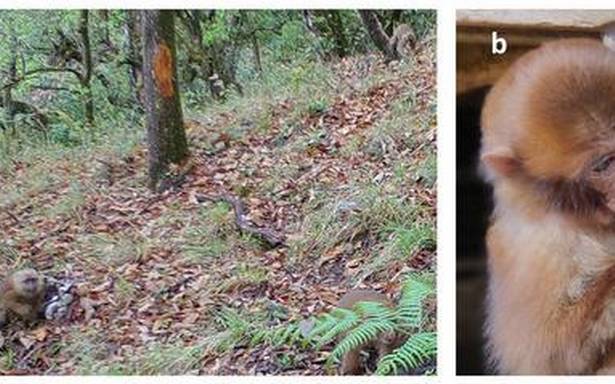 In an important discovery, scientists have recorded presence of White-Cheeked Macaque (Macaca leucogenys) from central Arunachal Pradesh in India. The significance of the discovery is that it marks a new addition to mammals of India.

The species was discovered in 2015 by a group of Chinese scientists from the Modog region in southeastern Tibet and this discovery was considered a significant breakthrough as far as primates are concerned.White- Cheeked Macaques are distinct from other macaques found in the region by displaying white cheeks, long and thick hairs on the neck area, and a longer tail.

From India, the species has not been sighted or reported after a single incidence of photographic capture from Anjaw district, Arunachal Pradesh in 2015, which raises controversy about its existence in India among the primatologists. Scientists from the Zoological Survey of India (ZSI) led by Mukesh Thakur were searching for red pandas and Arunachal Macaques in central Arunachal Pradesh when they unknowingly collected a few faecal samples, which on DNA analysis ended up to be White-Cheeked Macaques.

Subsequently, researchers under Dr. Thakur and Lalit Sharma, head of wildlife section of the ZSI collected multiple evidences, laid transects and deployed a few camera traps in central Arunachal Pradesh.Avijit Ghosh, who is studying the Arunachal Macaque, undertook DNA analysis from different sources which were confirmed to be of the elusive species discovered in China almost six years ago.The field efforts validated the occurrence of the species with a few photographic captures and also sampling a juvenile individual during questionnaires from the same region.

The result of the study — Serendipitous discovery of white-cheeked macaque (Macaca leucogenys) from Arunachal Pradesh , India is published in an international peer-reviewed journal Animal Gene.

Director of ZSI, Dhriti Banerjee said that the present study is pragmatic evidence of using non-invasive genetics to discover hidden biodiversity in landscapes where direct sighting of rare and elusive species is difficult due to dense canopy cover, low logistic feasibility and highly rugged terrain. Along with White-Cheeked Macaques and Arunachal Macaque the other species of Macaques are Assamese Macaque (Macaca assamensis) and Rhesus Macaque (Macaca mulatta) reported from the same landscape.The number of mammals reported from India stands at 434. The potential threat to all species of macaques in the landscape are due to hunting by locals for consumption and habitat degradation due to urbanisation and infrastructure development.