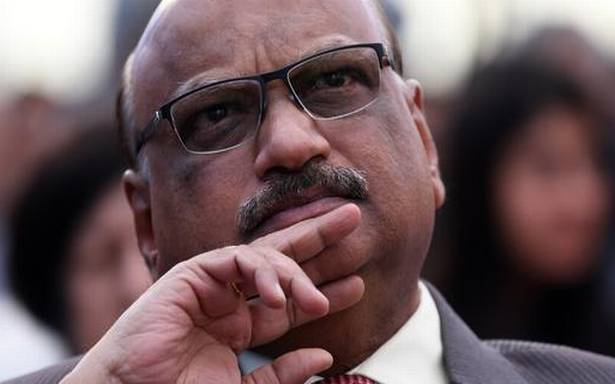 Chief Justice of India N.V. Ramana, judges of the Supreme Court Collegium flanked by a few other judges of the top court paid a short tribute.

The Supreme Court on Monday suspended its hearings as a mark of respect for Justice Mohan M. Shantanagoudar, who passed away in a private hospital at Gurugram on Sunday.

Chief Justice of India N.V. Ramana, judges of the Supreme Court Collegium flanked by a few other judges of the top court paid a short tribute to Justice Shantanagoudar. The judges then observed a two-minute silence.

After this, the CJI announced that “there’s an important announcement. The judicial business of today will remain suspended as a mark of respect and all matters listed today will be taken up tomorrow”.

Attorney General K.K. Venugopal, Solicitor General Tushar Mehta and senior advocate Vikas Singh, who is the president of the Supreme Court Bar Association, were seen on the virtual screen.

Several High Courts, including Allahabad and Himachal, have also suspended work for the day in show of respect for Justice Shantanagoudar.

Monday was Chief Justice Ramana’s first working day as top judge since he was sworn in on April 24.

He would continue the daunting task of steering the top court through a virulent surge in pandemic cases.

The Supreme Court Bar Association has already written to the CJI to declare an early summer vacation in a move to prevent lawyers and court staffers from being exposed to the virus. Lawyers have also urged that the additional block of the Supreme Court be converted into a COVID-19 care centre. The court may, in the coming days, also play a pivotal role in monitoring of the supply of essentials, drugs, medicines and oxygen, which are in short supply.