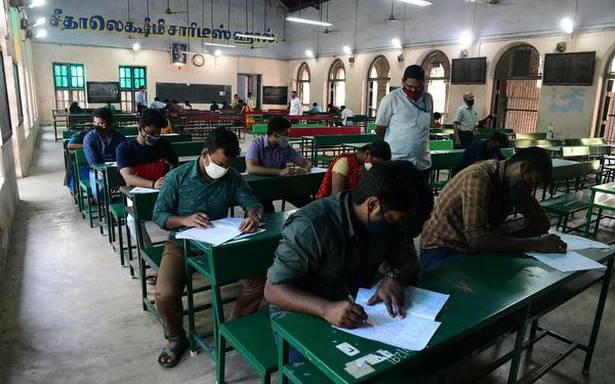 The Supreme Court on Thursday empathised with the plight of aspirants forced by COVID-19 restrictions to stay away from their final shot at the elite civil services exams in 2020 and gave them liberty to make a representation before the government for a second chance in 2021.

A Bench of Justices A.M. Khanwilkar and Sanjiv Khanna observed in its order that both the final attempters who were compelled to stay away from the exams and those who attended the exams despite being ill-prepared due to the pandemic, were at liberty to urge the government to take a “lenient view” in their cases and give them another opportunity.

The court did not intervene any further, reasoning that a three-judge Bench has, in February, declined similar pleas by aspirants for a second chance in 2021.

“If we have to grant relief, we have to do it for everybody. All aspects were considered in our judgment delivered by a Bench of three judges. We cannot interfere in a policy decision of the government unless it is unreasonable or arbitrary,” Justice Khanwilkar stated.

Justice Khanna said the decision to not intervene was not an easy one for the court. “We also feel the heartbreak. We have compassion for you,” he observed.

The Bench initially asked Additional Solicitor General Aishwarya Bhati whether the authorities could give another opportunity to the aspirants who were forced to not appear in the exam.

Senior advocates Gopal Sankaranarayanan and Krishnan Venugopal argued that the February judgment did not provide for aspirants who had lost their final chance in 2020 simply because they chose to comply with the law and COVID-19 restrictions.

“The government is denying us our dreams because we strictly obeyed the COVID-19 directions of the government and were conscious of the risk of spreading the virus. We did this at the cost of our future… We are now stuck between a rock and a hard place just because we followed the law,” Mr. Sankaranarayanan submitted.

Mr. Venugopal said the denial of another opportunity in 2021 would, in the context of not having been able to attend the exam for the final time last year, be a violation of the fundamental rights of the aspirants.

“But policies are generic in nature. It cannot be difficulty-specific or category-specific or tailored for a particular person or situation… It provides a level playing field for all. If concession is given to one category, others would come seeking more. There will be confusion. It will have a cascading effect. Besides, this is an issue a three-judge Bench of ours has already dealt with. We cannot tinker with policy unless you show us it is unreasonable or arbitrary… So instead of appealing to us, why don’t you address this to the government. Authorities have been liberal to you in the past,” the Bench said.

It was dealing with the submissions made by two categories of civil services aspirants.

The first concerned those who were unable to take their final attempt on October 4, 2020 due to the COVID-19 situation and lockdown. “The exam was scheduled to happen on October 4, 2020. However, on the day of exam, we were directly or indirectly affected by COVID-19 pandemic. Hence, on account of the restrictive protocols and guidelines given by the State, which included mandatory quarantine, etc, we were unable to appear in the exam and take their last attempt,” their writ petitions said.

The second group comprised aspirants who managed to take their final attempt at cracking the exam on October 4. These applicants claim they were compelled to risk their health during the pandemic and take the exam.