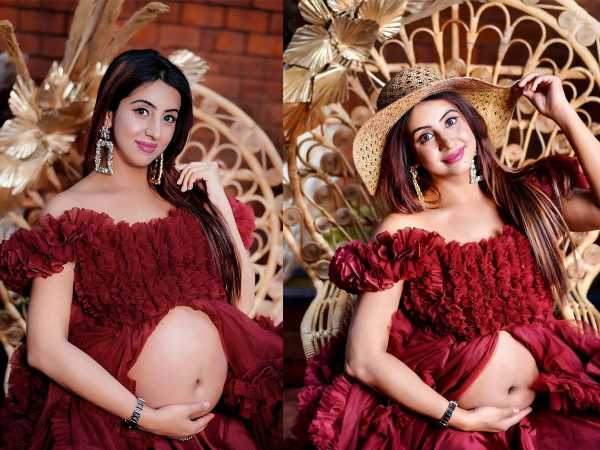 We have already reported that Sanjjanaa Galrani is all set to become a mother and the baby is due in May 2022.  Currently she is ninth month pregnant. Recently Sanjjanaa Galrani  did maternity photoshoot and shared the few pics on her Instagram which are going viral on the social media. She looks cute in red outfit.

The actress wrote: Life becomes Different & difficult when we look at embracing parent hood after being in the showbizz for a span of 18 years almost .. in the start a actress has to put her own career ,body ,fitness regime ,physical appearance  and  her own life in the back burner.

She further said, “Having done more than 50 movies , several television shows,  attending events , inaugurations in all four south languages travelling both nationally and internationally all the time with one leg on earth and another in the flight with 10-15 flights and 3-4 different cities in one given month came to me naturally all these years.

Sanjjanaa Galrani  further said, “And finally as I enter in the final month of my pregnancy  and  I m enjoying both sides of religions born as a Hindu  and  being married into a Muslim family.”

Sanjjanaa Galrani  made her debut in the 2005 Telugu film Soggadu.  The actress also played a supporting role in Telugu film Bujjigadu starring Prabhas.

04/29/2022 India Comments Off on Sanjjanaa Galrani shares photos of maternity photoshoot & writes, I enter in final month of pregnancy
India