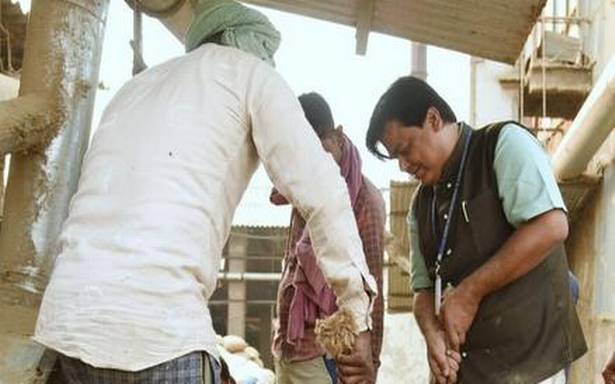 ‘It has dismantled the middlemen system in procurement of farm produce’

Principal Secretary to Chief Minister Praveen Prakash on Friday claimed that Rythu Bharosa Kendra (RBK) system is exemplary in the country, particularly in guaranteeing Minimum Support Price to farmers and procuring agriculture and commercial crops directly from them.

Mr. Praveen Prakash has inspected the functioning of the RBKs.

“The RBK is with the farmer at every stage beginning from seed supply to procurement of the yield in every nook and corner of the State. The RBK system has dismantled the middlemen system in the procurement of farm produce,” he said.

In Anaparthi mandal, Mr. Praveen Prakash, accompanied by Collector Ch. Hari Kiran, inspected the functioning of the RBKs and interacted with the farmers on the reach of the services.

He also took the stock of the existing status of Pedalandariki Illu housing sites and paddy procurement in the mandals of Pedapudi, Anaparthi, Mandapeta and Rajanagaram.

Mr. Praveen Prakash is on a three-day visit to the East Godavari district to study the implementation and impact of the State government’s welfare programmes. Joint Collectors and other senior officials accompanied him during the field trip.

12/24/2021 India Comments Off on Rythu Bharosa Kendra system is exemplary in the country, says official
India