Amid the ruckus, Speaker Rabindra Nath Mahto urged the protesting members to go back to their seats and allow the conduct of the business saying they should not test his patience. 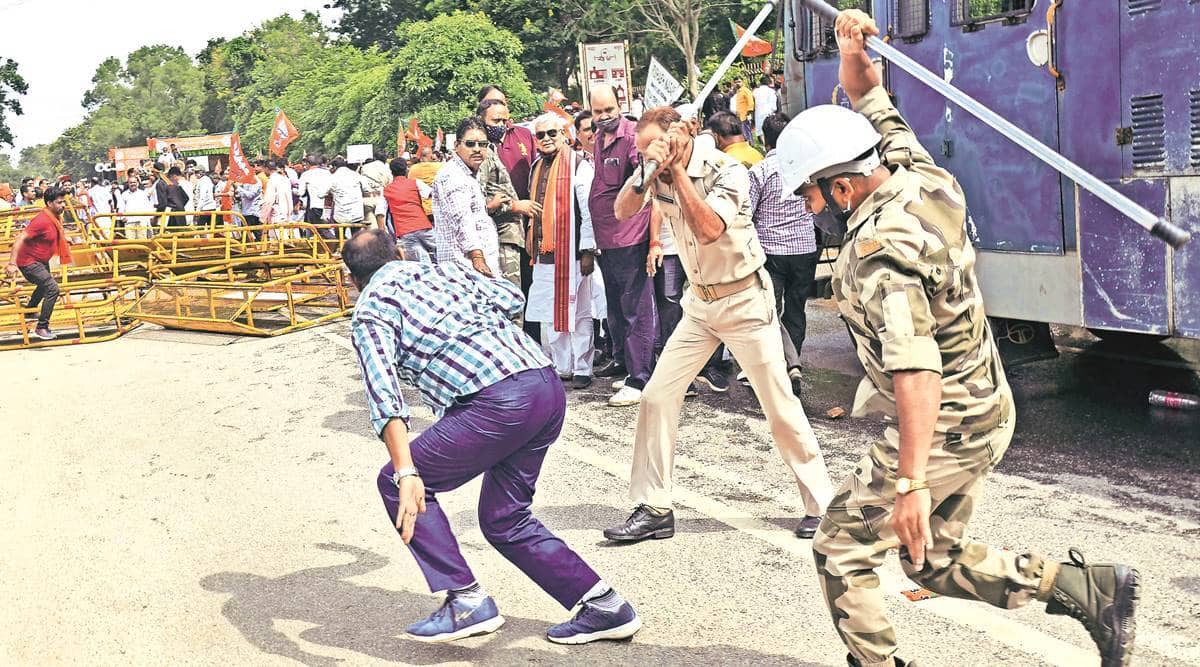 Uproarious scenes were witnessed in Jharkhand Assembly on Thursday with BJP MLAs barging into the well over ‘lathi charge’ on party workers protesting allotment of ‘Namaz’ room in Assembly soon after the House met for the day leading to its adjournment.

On the last day of the Monsoon session of the Assembly, the legislators from the main opposition BJP, sporting black straps started raising slogans like “Lathi Goli Wali Sarkar Nahi Chalegi” while displaying newspapers as soon as the proceedings of the House began.

Amid the ruckus, Speaker Rabindra Nath Mahto urged the protesting members to go back to their seats and allow the conduct of the business saying they should not test his patience.

However, the members were relentless prompting the Speaker to adjourn the House till 12.45 pm.

“Please don’t take a test of patience of the Chair. You have privilege but place your views under the system. I can only request you. If you don’t want me to run the House, let me adjourn it,” the Speaker said.

Parliamentary Affairs Minister Alamgir Alam was heard saying that raising slogans was one thing but opposition members, it seems, have come to fight which is shameful and action should be initiated against them.

The BJP members were enraged over ‘lathi charge’ and use of water cannon on protesters on Wednesday as BJP had planned to gherao the Assembly to protest the allotment of a room by the Speaker for offering Namaz.

Before the start of the House proceedings, the BJP members staged a dharna outside the Assembly.

Health Minister Banna Gupta reached the Assembly driving an auto, enraged over a remark in Assembly by BJP MLA CP Singh earlier, which was expunged. He told reporters that when a Chaiwala (person selling tea) can become Prime Minister, why can’t an auto driver from the backward and Dalit community could become a Health Minister.

Police on Wednesday used water cannons and batons to break up protests by the BJP against allotment of a room for offering ‘Namaz’ in the state Assembly.

The state BJP claimed that a number of its workers were injured in the “lathi charge” (baton charge) and have been admitted to city hospitals.

The BJP which had taken to the streets against the decision to allow a ‘Namaz’ room in the Assembly is observing a ‘Black Day’ on Thursday against the ‘lathi charge’ of its workers and asked all its activists to sport black badges.

BJP leaders have accused the Hemant Soren-led Jharkhand government for its “appeasement policy” saying it was hardly bothered about constitutional values and tradition.

A row broke out in Jharkhand after the assembly speaker allotted a room in the Assembly for offering ‘Namaz’ through a notification last week.

The opposition leaders have been protesting against the decision, calling it “unconstitutional.” They are also demanding a separate hall for chanting “Hanuman Chalisa.”