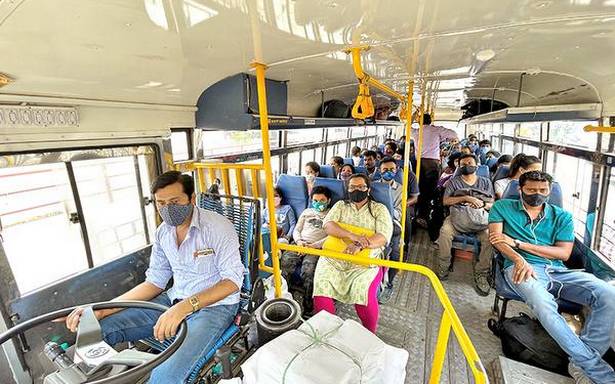 From 264 buses on the first day, numbers crossed 1,600 by Saturday evening

Though there appears to be no resolution in sight for the ongoing strike, State road transport corporations (RTCs) were able to operate 1,626 buses on Saturday. On April 7, the first day of the strike, only 264 buses were able to offer services to passengers across Karnataka.

Karnataka State Transport Corporation (KSRTC) managing director Shivyogi C. Kalasad said, “On Saturday, we operated 1,626 buses, almost double the number of Friday. It is a sign that more employees are reporting back to duty and we are hopeful that others will follow.”

However, the number of buses currently operating is still a fraction of the fleet strength: prior to the strike, the four corporations were running more than 17,000 buses in the State.

Strict action such as dismissal of trainee and probationary employees for taking part in the strike, and transferring some employees for allegedly obstructing their colleagues who reported back to duty or instigating others to participate in the strike is yielding results. “The corporations have also filed complaints against those obstructing employees who are willing to report back to duty and pelting stones at buses,” said Mr. Kalasad

He added that trainees or probationary employees who continue to participate in the strike or remain absent would face action. “Those who have been dismissed from service will not be reinstated,” he said.

However, the Karnataka State Road Transport Corporation Employees League reiterated that it had no intention of calling off the strike. President of the league, R. Chandrashekar said, “Some employees of other unions are reporting back to duty. Those who have identified with us are still on strike. We will continue.”

Striking employees are demanding that their salaries be revised as per the Sixth Pay Commission recommendation.

Private operators, however, are irked by this development, and have demanded that the KSRTC follow a queue system at bus stands. Chairman of the Karnataka State Travel Operators Association S. Nataraj Sharma said, “When RTC employees went on an indefinite strike, the State government had requested private operators to run buses from major bus stands. But now the KSRTC is gradually increasing its operations and we are being sidelined. When other private buses are waiting for the passenger, KSRTC buses should not jump the queue.”

On Saturday, the Bangalore Metropolitan Transport Corporation (BMTC) issued notices to nearly 1,000 employees aged above 55 directing them to submit health fitness certificates by April 12. The notification stated that as per the service rules, it is mandatory to submit fitness certificate to continue in service. Those who fail to submit the certificate will be retired from service, it warned.

The BMTC also dismissed 60 trainee and 58 probationary employees for taking part in the strike and not reporting to duty. To date, the BMTC has dismissed more than 300 such employees. As many as 222 employees, including 171 drivers and 51 mechanics, were transferred by the NWKRTC on Saturday.